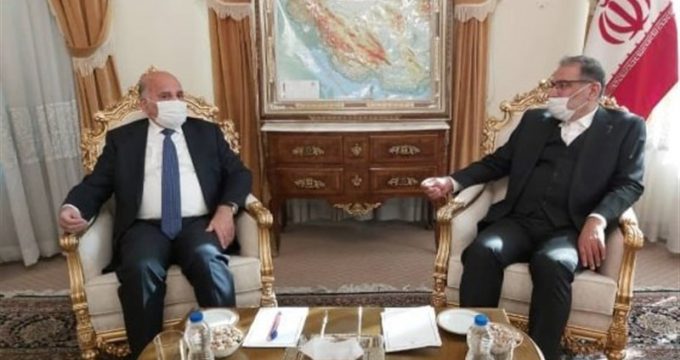 US exit from Iraq prelude to expulsion from entire region: Iran’s Shmakhani

The secretary of Iran’s Supreme National Security Council hailed the Iraqi parliament’s resolution on the expulsion of US forces as a good prelude to the withdrawal of American troops from the entire region.

In a meeting with the Foreign Minister of Iraq Fuad Hussein, held in Tehran on Wednesday, Ali Shamkhani described the “evil presence of foreign forces, particularly the American forces” as the root cause of regional instability and crises.

The senior Iranian security official also noted that the immediate implementation of a law passed by the Iraqi parliament on the expulsion of American military forces from the Arab country would be a good prelude to their exit from the whole region.

He also praised Iraq’s judiciary for issuing arrest warrants for Donald Trump and Mike Pompeo -the former president and secretary of state of the US- over the assassination of top Iranian commander Lt. General Qassem Soleimani and Iraqi General Abu Mahdi al-Muhandis, saying those who ordered and perpetrated such terrorist crime must receive the maximum punishment.

Security, stability, and calm in Iran and Iraq are interrelated, Shamkhani stressed, saying it is necessary for the Iraqi government to strengthen and stabilize its sovereignty and power in enforcing law and order in order to overcome the political, economic, and security problems.

Shamkhani finally stated that the revival of Iraq’s major political and historical place in the Islamic and Arab world would provide an opportunity for Baghdad to play an active role in settling the conflicts and supporting sustainable stability in the Arab countries.

For his part, the Iraqi foreign minister called for closer cooperation with Iran in various fields, saying one of Iraq’s main foreign policy priorities is to accelerate the implementation of joint economic projects with friendly and brotherly Iran.