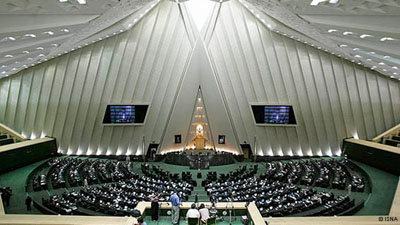 Iran’s parliament has rejected President Hassan Rouhani’s draft state budget of about $33.7 billion for the Persian year of 1400 which begins on March 21.

Members of parliament dismissed the general outlines of the budget bill by 148 votes to 99 on Tuesday during a stormy session, IRNA news agency said. Twelve lawmakers abstained.

President Rouhani did not attend the parliament’s reading of the draft budget, sending his deputy in charge of economic planning Mohammad Baqer Nobakht instead.

Nobakht had his microphone unceremoniously muted during his defense of the bill, with Parliament speaker Mohammad Baqer Qalibaf explaining that his 20-minute time was up.

he government presented the draft budget to parliament early last month, promising less reliance on oil revenues and higher growth, but it took not long before critics described it as too generous on government spending and short on development funds.

President Rouhani has dismissed such criticism and on Tuesday, he told a government meeting before the parliament session that the new budget had been drafted to manage the development path during an economic war.

“From the government standpoint, any change in the structure and main focuses of the 1400 budget bill could cause serious damage to the people’s livelihood and the path of the country’s development and management of the economy,” he said.

The draft focuses on the nation’s welfare, with infrastructure reforms, health, creating jobs, and boosting non-oil exports among its key goals, according to the government.

The budget of 8,413 trillion rials is up 74% from last year’s figures, but way too low from the years before the most draconian US sanctions ever targeted Iran’s oil exports and almost every key hard currency earning sector.

Iran continues to sell oil, but the exports are a fraction of what they were before the sanctions. President Rouhani has said he expects oil experts to rise this year – to 2.3 million barrels per day – but critics see it too optimistic.

“We set the highest record of exports of refined products in the history of the oil industry during the embargo period,” he said.

“If the sanctions are lifted, we will return to the market stronger than before, and faster than expected,” Zanganeh added.

Still, Iranian barrels are not expected to return to the oil market in the near future. Despite the new US administration’s attestations of willingness to return to the nuclear deal which its predecessor abandoned in 2018, new Secretary of State Antony Blinken has said that the United States was a “long way” from lifting its illegal sanctions.

The government has reportedly based the budget on an oil price of $40 per barrel. It also plans to sell state bonds and properties to generate revenues.

Minister of Economic Affairs and Finance Farhad Dejpasand said in remarks published Tuesday that the government expects to earn 1,400,000 billion rials ($33.2 billion) from the capital market and foreign investment in the new fiscal year.

The government has encouraged Iranians to invest in local stocks to boost the economy. Last August, Iran’s main stock broke through its all-time high above 2 million points but it has lost steam ever since.

On Tuesday, the Tehran Stock Exchange continued a downtrend for months, with benchmark TEDPIX index losing 28,241 points to close at 1,205,000.

During its bull run, some economists had warned that the market was overheating. Others were and still are wary of the inflationary impact of the bourse.

Opponents of the proposed budget have said it would cause high inflation in the country’s economy. They also say it is unrealistic and lacks transparency.

Government spokesman Ali Rabiei said after the vote that the administration was ready to cooperate with parliament to amend the bill, but it would not accept changing the budget’s structure.