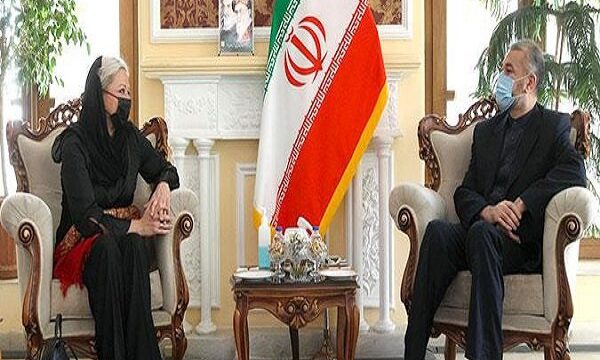 A senior Iranian Parliamentary advisor said, “Iran strongly supports the security and stability of Iraq and warns those who seek the re-emergence of terrorism in Iraq, Syria, and the region.”

Hossein Amir Abdollahian, Special Assistant to the Iranian Parliament’s Speaker and Director General of International Affairs of the Parliament met and held talks with Jeanine Hennis-Plasschaert, Special Representative of the United Nations Secretary-General for Iraq.

While emphasizing the deep and strategic relations between the two countries, Amir Abdollahian said in the meeting, “Tehran-Baghdad relations always have a friendly and growing trend.”

The efforts of some countries, including the United States and Saudi Arabia, in the managed use of terrorism and inciting insecurity, are among the causes of insecurity in Iraq and the region, he said.

He went on to say that the enemies have once again targeted the security of Iraq, “We must fight the roots and causes of extremism and terrorism.”

Referring to the upcoming parliamentary elections in Iraq, he said, “We respect the vote and decision of the Iraqi people; Today, Iraq is an example of democracy in the region.”

The roots of terrorism must be eradicated, and with the military defeat of ISIL, one cannot hope for the elimination of their core, said Hennis-Plasschaert .

“The United Nations seeks peace and security and it will do its utmost to hold a peaceful election in Iraq. This does not mean interfering in the affairs of Iraq, but we will only monitor until a healthy election based on the people’s vote is held”, she added.