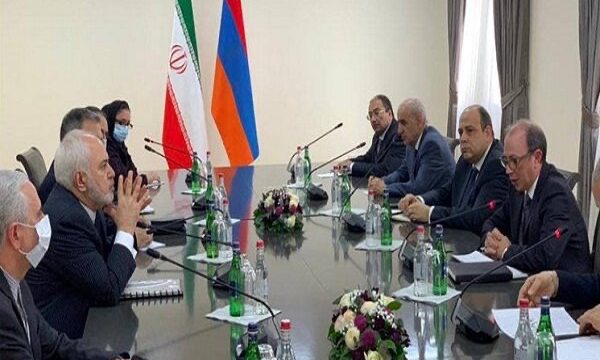 Ara Aivazian made the remarks in his meeting with Iranian counterpart Mohammad Javad Zarif on Wednesday.

During the meeting, the two sides discussed the latest regional issues, as well as bilateral cooperation.

Emphasizing the importance of territorial integrity, independence and national sovereignty of all countries in the region, including the Republic of Armenia, Iranian FM considered it necessary to respect the rights of all ethnic groups in the region.

He also described the territorial integrity of Armenia as the red line of the Islamic Republic of Iran, which has already been explicitly stated.

Zarif called the decision of the Government of Armenia and the Prime Minister Pashinyan to move towards the future courageous and important, which was welcomed by the Islamic Republic of Iran as a neighboring country, which suffers from any pathetic conflict in the region.

Iranian foreign minister lamented the human damage caused by the recent conflicts in the region and announced the country’s readiness for any assistance and efforts in this field.

He also expressed hope that the human issues resulting from these developments in the region would be resolved as soon as possible.

He announced Iran’s readiness for bilateral cooperation with Armenia and other neighbors in this field and assistance to economic development by taking the opportunity and the common interests of the countries in the region.

Emphasizing the good neighborliness of the two countries, Aivazian, for his part, cited the Iran-Armenia friendship as a good example of intercultural, civilizational dialogue and coexistence based on mutual respect and trust.

He emphasized the importance of close political, economic and trade talks with Iran, calling this meeting a good opportunity to exchange views on the prospects of future cooperation.

Banking relations between the two countries, issues related to transportation, exports of Iranian products and issues related to the environment of the Aras River were other topics discussed by the Foreign Ministers of Iran and Armenia during the meeting.

He had previously traveled to the Republic of Azerbaijan and the Russian Federation to discuss bilateral relations and developments in the region, especially the situation in Nagorno-Karabakh.

During the meeting with Aliyev, Zarif welcomed the proposal of the President of Azerbaijan entitled “Initiative for Six-Party Cooperation in the Regions” and stated the readiness of Iran to assist and cooperate in all fields that will contribute to peace, stability and tranquillity in the region.