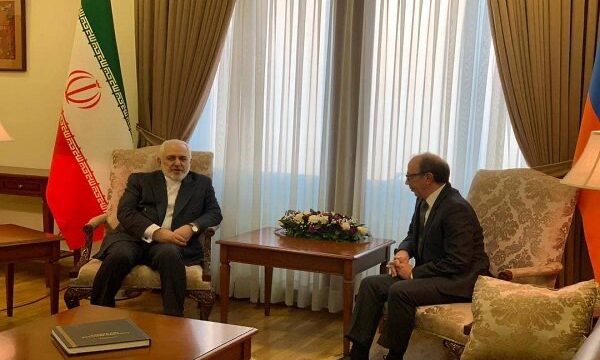 Zarif, who arrived in Yerevan for the third destination of his trip to the region on Wednesday morning, held a meeting with Armenian Foreign Minister Aivazian.

Referring to the recent conflict between the Republic of Azerbaijan and Armenia over the disputed territory of Nagorno-Karabakh, Zarif said, “After this catastrophic tragedy, in which many civilians and soldiers lost their lives, an opportunity for cooperation and confidence-building in the region has been provided.”

Upon his arrival in Yerevan, Iranian Foreign Minister said that cooperation between the countries of the region can bring long-term peace and stability.

Zarif told reporters that Armenia is an old neighbor and friend of the Islamic Republic of Iran.

He had previously traveled to the Republic of Azerbaijan and the Russian Federation to discuss bilateral relations and developments in the region, especially the situation in Nagorno-Karabakh.

During the meeting with Aliyev, Zarif welcomed the proposal of the President of Azerbaijan entitled “Initiative for Six-Party Cooperation in the Regions” and stated the readiness of Iran to assist and cooperate in all fields that will contribute to peace, stability and tranquillity in the region.

Iran-Armenia relations January 27, 2021
FM Zarif says US must make up for its mistake
Iran Pres. Rouhani criticizes EU partners for lack of commitment