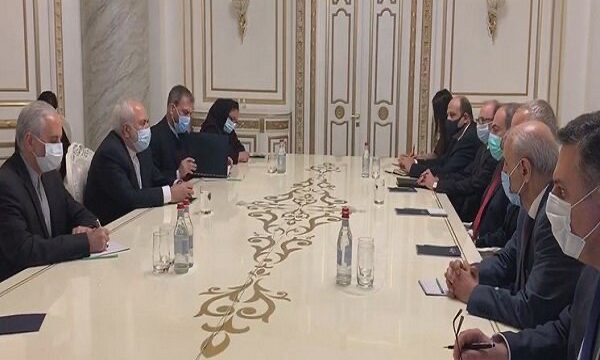 In his meeting with the Armenian Prime Minister, the Iranian Foreign Minister stressed respecting international law, the rights of minorities, and territorial integrity.

Mohammad Javad Zarif, who arrived in Yerevan for the third destination of his trip to the region today, met and held talks with Armenian Prime Minister Nikol Pashinyan.

“Armenia is a very good neighbor of the Islamic Republic of Iran and our relations are very close. You are highly respected in Iran,” Zarif said.

“We have common regional concerns with your country, and we have been in contact with you and other countries in the region since the recent conflict, and we are interested in continuing the contacts for the future of cooperation and peace in the region,” he added.

Iranian foreign minister highlighted, “Respecting international law and the protection of the people, respecting the rights of minorities and territorial integrity, and not resorting to force are the main and strategic positions of our foreign policy.”

“Iranian Leader stressed the need for a dignified life with security for all Armenians in the region,” he added, saying, “We also host a large number of Armenian compatriots and we have a long-standing relationship with them and we insist on this principle.”

During the meeting, the two sides discussed the latest regional issues, as well as bilateral cooperation.