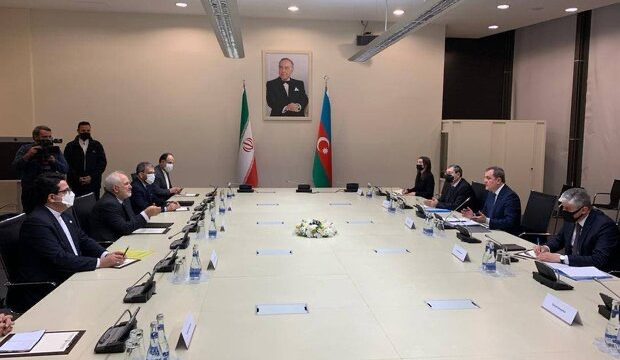 Iran not considering any limits for coop. with Azerbaijan, Zarif says

Iran’s Foreign Minister voiced the readiness of the country’s economic sectors to take an active part in the economic projects of Azerbaijan, stressing that Tehran does not consider any limits for cooperation with Baku.

Iranian Foreign Minister Mohammad Javad Zarif made the remarks in his meeting with his Azerbaijani counterpart Jeyhun Bayramov on Monday.

During the meeting, the two sides discussed the cooperation of the two countries in various fields, as well as regional issues.

Zarif expressed satisfaction with his presence in the Republic of Azerbaijan after the liberation of the occupied territories and paid tribute to the victims of the war, calling the new stage an important moment to help establish peace and stability in the region and for the benefit of all parties.

Describing the purpose of his visit to the region as an effort to establish peace and tranquillity, he expressed satisfaction with the increase of meetings between the officials of the Republic of Azerbaijan and Iran in recent months.

Zarif announced Iran’s readiness for an active and extensive presence in the reconstruction of the liberated areas, which are located on the common borders of the two countries.

He pointed to the fruitful talks between the two countries at the recent meeting of the Joint Commission for Economic Cooperation, saying that the views expressed by the President of Azerbaijan during today’s meeting indicate the serious determination of the two countries for cooperation.

Stating that Iran does not consider any limits for cooperation between the two countries, Zarif announced the comprehensive readiness of various economic sectors in Iran to take an active part in the economic projects of the Republic of Azerbaijan

Iranian foreign minister also described the establishment of calm and peace in the region as a great opportunity for cooperation between the two countries in the field of transit and activation of the East-West and North-South corridors.

Jeyhun Bayramov, for his part, called the relations between the two countries based on friendship and historical and cultural commonalities and appreciated the positions of the Islamic Republic of Iran at the highest and popular levels towards the territorial integrity and sovereignty of this country.

Referring to the meetings of two countries’ high-level delegations, he described the development of economic relations as one of the important priorities in the relations Iran and Azerbaijan.

Cooperation between the two countries in the Caspian region, cultural issues, cooperation in the field of water, transportation and international affairs, and trilateral cooperation with Turkey were among the topics discussed by two foreign ministers.

Aliyev welcomed the presence of Iranian companies in the reconstruction of the freed regions of Karabakh.

He also expressed satisfaction with the Islamic Republic’s view on Azerbaijan’s proposed regional cooperation plan on peace, he called the proposal in favor of peace and common interests in the region.

Zarif arrived in Baku late on Sunday as part of a regional tour that will also take him to other countries including Russia later.

He and the accompanying delegation were welcomed in Baku International Airport by a number of Azerbaijan political officials and Iran’s Ambassador in Baku Abbas Mousavi.