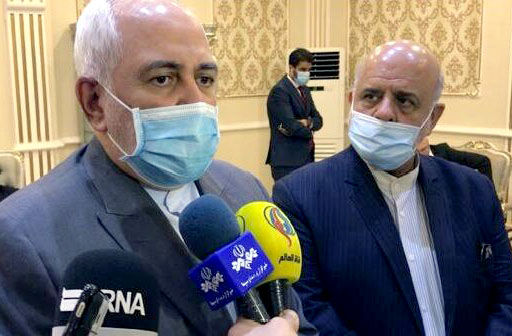 Upon arrival in Baku late on Sunday, he told IRNA that Iran’s arms have always been and will be open for the neighbors in this respect.

Zarif further noted that he is pleased to embark on a visit to Caucasus region, adding that the trip will also take him to Russia, Armenia, Georgia and Turkey at the end of the week.

Main topic for discussion during the visit is regional collaboration which is very important to Iran, Zarif said, noting that one of the most important goals of this trip is to discuss regional cooperation with these countries, which have very good bilateral relations with Iran.

Referring to his meetings with Azeri officials on Monday slated to focus on Karabakh reconstruction and collaboration to maintain security in this region, he added, “We are pleased that our brother country and nation of Azerbaijan Republic has gained lands and we would like to help the residents of the liberated lands return their homes as soon as possible.”

Zarif arrived in Baku late on Sunday as part of a regional tour that will also take him to other countries including Russia later.

Zarif and accompanying delegation were welcomed in Baku International Airport by a number of Azerbaijan political officials and Iran’s Ambassador in Baku Abbas Mousavi.

He is slated to hold talks with Azeri President Ilham Aliyev and counterpart Jeyhun Bayramov as well as the First Deputy Prime Minister of Azerbaijan Shahin Mustafayev on Monday to discuss bilateral relations and regional developments.