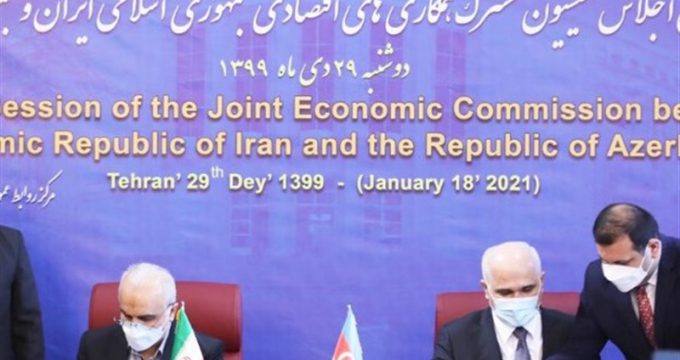 Iran and the Republic of Azerbaijan signed a new agreement at the conclusion of the latest round of the Joint Commission on Economic Cooperation in Tehran, focusing economic interaction on joint investment plans and construction projects in Nagorno-Karabakh.

In a Monday ceremony after signing the contract, Iran’s Finance Minister Farhad Dejpassand said it will be focused on how the two neighboring countries would be able to expedite current joint projects while introducing mechanisms that could lead to a finalization of future cooperation plans.

Dejpassand said that Azerbaijan had agreed as part of the document to allow Iranian private companies to get involved in various development projects in the country.

The minister elaborated that those projects would be mostly focused on “reconstruction” efforts in Azerbaijan, suggesting that Iran would become involved in plans to develop liberated regions surrounding Nagorno-Karabakh, Press TV reported.

“The Islamic Republic of Iran’s fundamental policy has always been based on deepening and expanding political and economic relations with all countries, especially the Muslim and neighboring countries,” said the minister.

“Relations between Iran and Azerbaijan have a high significance with regard to historic, cultural, religious and economic aspects,” he said.

Shahin Mustafayev, the first deputy prime minister of Azerbaijan, who led his country’s economic delegation in the meeting in Tehran, said the two countries were bracing for a new chapter in their economic ties.

Mustafayev said Azerbaijan would openly welcome the contribution of major Iranian companies to reconstruction programs for the war-torn regions near Nagorno-Karabakh.

After a clean-up in the liberated regions, we will be ready for joint projects with major Iranian companies in those regions in the fields of infrastructure, construction, equipment manufacturing and pharmaceuticals, said Mustafayev.

Iran has already expressed willingness to participate in the reconstruction of the Azeri regions recently liberated after a war between Baku and Yerevan over the Nagorno-Karabakh region.