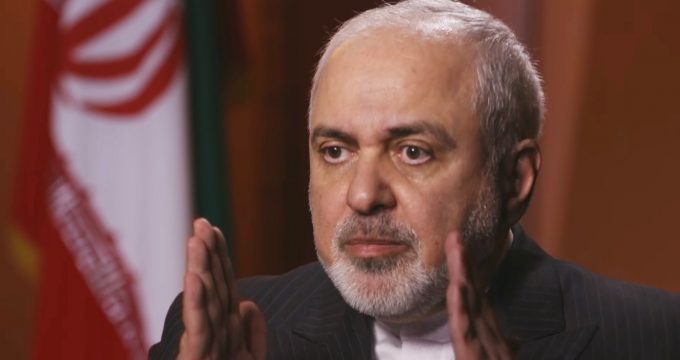 Iran’s precondition for US to return to JCPOA tangible sanctions relief, not empty signatures: Zarif

Foreign Minister Mohammad Javad Zarif says — as per Leader of the Islamic Revolution Ayatollah Seyyed Ali Khamenei’s assertion — Iran has to effectively feel the results of any potential sanctions relief from the United States, not merely a toothless signature, in case Washington decided to return to its obligations under the 2015 nuclear agreement.

Zarif was speaking to Khamenei.ir, Ayatollah Khamenei’s official website, that published the interview on Tuesday. The interview has been subsumed under a section of the website titled “Definitive Statement” that covers Iranian officials’ observations on the Leader’s recent comments about the United States’ obligations towards the Islamic Republic.

Delivering a televised address earlier this week, Ayatollah Khamenei asserted that Iran’s “ultimate and definitive” position on the matter was that the US had to primarily lift its sanctions against the Islamic Republic. The Leader called the Iranians’ right to lead a sanctions-free existence “a right that has been usurped” by Washington.

This, the Leader noted, was Iran’s “logical and rational” demand from the US, instead of a mere ceremonial return to the 2015 nuclear deal between Iran and others, under which Washington is supposed to lift the sanctions.

US President Donald Trump’s administration returned the bans after quitting Washington’s participation in the agreement in 2018.

This is while the accord, officially known as the Joint Comprehensive Plan of Action (JCPOA), has been ratified as a United Nations Security Council Resolution — making Washington’s unilateral withdrawal illegal under international law.

Zarif cited Ayatollah Khamenei’s statement, saying, “The US’s mere return to the JCPOA under the current circumstances does not suffice.”

“It will not do if Mr. Biden suffices to signing” the US’s return to the deal, he said in reference to an expression of willingness on the part of Trump’s successor, Joe Biden, to potentially bring the US back into the JCPOA.

“Although, signing [it] is the necessary condition, the sufficient condition here is witnessing the effects of the US actions,” Zarif added.

He reminded that not only did Trump’s team restored the sanctions against Iran, but also it imposed new sanctions to complicate the removal of the initial bans. Zarif cited Washington’s move to sanction Iran’s Central Bank and the Ministry of Petroleum under its so-called “terrorism designation” as an instance of the Trump administration’s obfuscatory measures targeting Iran.

The foreign minister said Trump took those measures as a means to “destroy” the JCPOA and “deplete it of its [effectual] content.”

“The US has to first live up to its obligations” of terminating all these complications and help restore Iran’s trade ties with the world back to normal, Zarif said. Then, the issue of its return to the JCPOA can be addressed, he added.

Aside from enabling restoration of Iran’s banking and oil trade with the world, the US has to take action to lift the restrictions that face international transportation and insurance cooperation with Iran, the senior Iranian official stated.

The foreign minister, meanwhile, reminded how the Leader has identified the issue of Iran’s compensation for the damage that it has suffered as a result of the US’s coercive measures as something that has to be addressed in subsequent stages.

“The JCPOA is not like a revolving door” that can be used by its participants to enter and exit the deal at will, Zarif said, adding that not only the Islamic Republic, but also its trade partners that have suffered as a result of the bans, have to be compensated duly.

He, meanwhile, noted that Iran is a law-abiding country and would resume its nuclear obligations under the JCPOA if the other side does the same.

“If Mr. Biden signed an executive order, we would sign one too. Whenever, they (the Americans) started to implement it, we would implement [our side of the deal] too,” Zarif said.

In response to Washington’s unilateral withdrawal from the JCPOA, Tehran has so far rowed back on its nuclear commitments five times in compliance with Articles 26 and 36 of the nuclear deal.