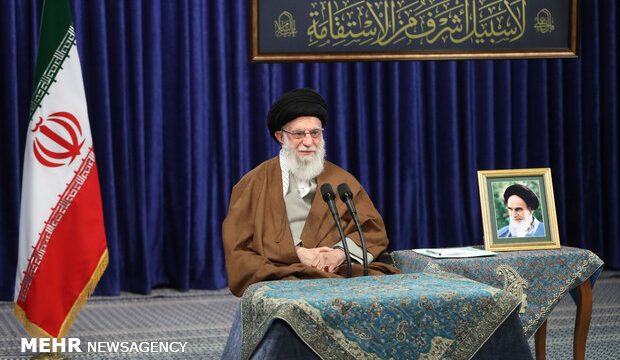 US no ‘idol’ anymore with its election fiasco, human rights records: Iran Leader

Leader of the Islamic Revolution Ayatollah Seyyed Ali Khamenei says it is weird that some still worship the US as their idol despite the country’s election fiasco, paralyzed economy, and human rights records.

“Today we can see what that big idol has turned into. This is their democracy. This is their election fiasco. This is their human rights: they kill a Black person once in every couple of hours or days, and the murderer is not prosecuted. These are ‘American values’ ​​that today are ridiculed. This is their paralyzed economy. The US economy is truly paralyzed,” Ayatollah Khamenei said in televised speech on Friday.

The Leader said the result of US presence in Iran [before the 1979 Revolution] was economic and scientific poverty and corruption.

“Some think if we reconcile and interact with the US, [Iran] will turn into a paradise,” the Leader added.

Ayatollah Khamenei further noted the Americans admit that their interests are secured by creating instability in the region.

“The US sees its interests in regional instability under the current circumstances unless it is the dominant power in the region,” he added.

“This is what they have admitted. A famous expert of one of these American think tanks clearly said that ‘we are not after stability in Iran, Iraq, Syria, and Lebanon’. The main issue is not whether instability is needed in these countries. Rather it is how to create that instability. Once with Daesh and once with the 2009 sedition (post-election riots in Iran) or the things they do in the region,” Ayatollah Khamenei said.

The Leader stressed that Iran stood against the US’ bid to create instability in the country.

“In 2009, the US wanted to make Iran unstable. But that happened to themselves in 2020-21. You saw the people who breached the US Congress. The Americans sought to do the same in Iran. They wanted to create chaos and trigger a civil war,” Ayatollah Khamenei added.

‘No American or British vaccine’

Elsewhere in his remarks, the Leader expressed his opposition to the import of COVID-19 vaccines produced by the US and Britain.

“I have already said it to government officials, and now announce it publicly. The import of American and British vaccines is prohibited,” the Leader noted.

“Had the Americans managed to produce a vaccine, they would not have faced such a mess today in their own country. In one day, some 4,000 people died from COVID-19 in the US,” Ayatollah Khamenei said.

“I really don’t trust them. Sometimes they want to test the vaccine on other nations,” the Leader added.

Ayatollah Khamenei also noted that he is not optimistic about France as the country was involved in the infected blood scandal in early 1990s.

The Leader stressed, however, that the Iranian government is allowed to supply the COVID vaccine from other reliable sources.

Ayatollah Khamenei also hailed the domestically-developed Iranian coronavirus vaccine, calling it a source of pride and honor, and stressing that this should not be denied. The Leader noted that the human trials of the Iranian vaccine were conducted in one case and they succeeded.

“This should not be denied … The vaccine has gone under human trials. God willing a better version will also be developed in Iran. This is a source of pride and dignity,” the Leader noted.

‘US return to JCPOA detrimental if sanctions not lifted’

Ayatollah Khamenei further pointed out that Iran is in no rush for the US return to the 2015 nuclear deal, officially known as the Joint Comprehensive Plan of Action (JCPOA).

“Our rational demand is the lifting of the sanctions. This is the Iranian nation’s right which has been violated. They are duty-bound to do that …. If the sanctions are lifted, then the US return to the JCPOA will mean something,” the Leader said.

He said the issue of compensation will be raised in the next stage.

“But if the sanctions are not lifted, their return to the JCPOA maybe even to our detriment,” he added.

The Leader said the recent move by the Parliament and the administration to stop the implementation of nuclear commitments was a totally logical, rational, and acceptable decision.

However, the Leader noted, if they return to their commitments, we will do the same.