In a tweet on Tue., Zarif wrote, “Congratulations to Qatar for the success of its brave resistance to pressure & extortion. To our other Arab neighbors: Iran is neither an enemy nor threat.”

“Enough scapegoating—especially with your reckless patron on his way out. Time to take our offer for a strong region. #HOPE,” he added. 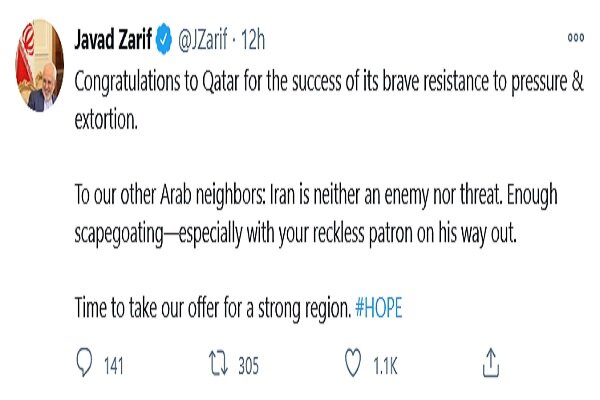 An hour ago, Saudi Arabia’s foreign minister announced that the country and its three other allies had reached an agreement to restore full diplomatic relations with Qatar.

The Saudi foreign minister’s remarks came after Arab leaders at a meeting in Riyadh signed an agreement entitled “Stability and Solidarity Agreement”. The Arab leaders met during the annual meeting of the Persian Gulf Cooperation Council (PGCC) member states.

Saudi Arabia announced yesterday on January 4 that it has reached an agreement to reopen land, air and sea borders of besieging countries with Qatar.

Saudi Arabia, Bahrain, the United Arab Emirates and Egypt cut diplomatic ties with Doha about three and a half years ago, accusing Qatar of supporting terrorist groups and proximity of its policies to Iran.