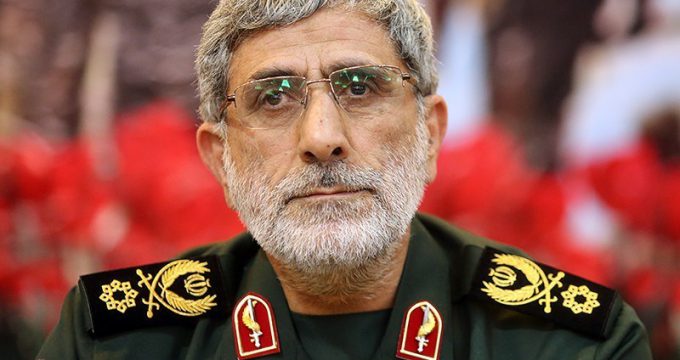 Some ‘inside US’ may avenge Trump-authorized Soleimani assassination, says IRGC Cmdr.

Commander of the Quds Force of the Islamic Revolution Guards Corps (IRGC) says people inside the US may avenge the assassination of top Iranian anti-terror commander, Lieutenant General Qassem Soleimani.

“With what you did, you created another job for the freedom-seekers of the entire world, and it is even possible that some people inside your home (the US) … would respond to your crime (of assassinating General Soleimani,” Brigadier General Esmaeil Qa’ani said on Friday.

He made the remarks in an address to a ceremony marking the first anniversary of General Soleimani’s martyrdom.

General Qa’ani further said the path of IRGC Quds Force and the Resistance Front will not change with the US “acts of mischief”.

“Soleimani’s path had a leader. The key to General Soleimani’s greatness was that he always moved ahead under this leadership. This leadership is still in place, and the support for the oppressed will also continue,” he noted.

The Quds Force commander further cited regional examples to show the US assassination of General Soleimani has failed to impact the Resistance Front.

“In Palestine, a military drill is held on the anniversary of Hajj Qassem in a place where no one would previously fire a single bullet. Also in Lebanon, the Zionists have been in fear for the past three months,” he said.

“Today in Syria almost the entire country except for the territory occupied by the criminal US has been liberated. In the innocent and powerful Yemen, we see they are still moving ahead,” Qa’ani added.

He said the enemies of the Islamic Republic sought to target General Soleimani and Abu Mahdi al-Muhandis for thirty years, and finally the “filthiest man” was tempted by the Israeli regime and Saudi Arabia and made such an “unwise” move.

“The entire world will definitely condemn you. Those who committed this crime must know that all around the world, you may find a brave man who is ready to punish the cowards who did that,” he added.

‘Trump not immune to administration of justice’

Addressing the same ceremony, Iranian Judiciary Chief Ebrahim Raisi said the enemy must know that life will get very difficult for it from now on, and the perpetrators of the assassination won’t be safe anywhere in world.

The US president will not be immune to the administration of justice. The enemy should not think that the US president would enjoy a margin of safety after ordering the crime, he added.

He further noted that the enemy must await Iran’s harsh revenge.

“The time and location [of the revenge] will be determined by resistance forces,” he noted.

The Judiciary chief said the definite expulsion of Americans from the region will be one of the manifestations of the harsh revenge.

The top commander was assassinated along with his senior Iraqi comrade Abu Mahdi al-Muhandis and a number of other resistance fighters in a January drone attack, ordered by US President Donald Trump, near Baghdad International Airport.