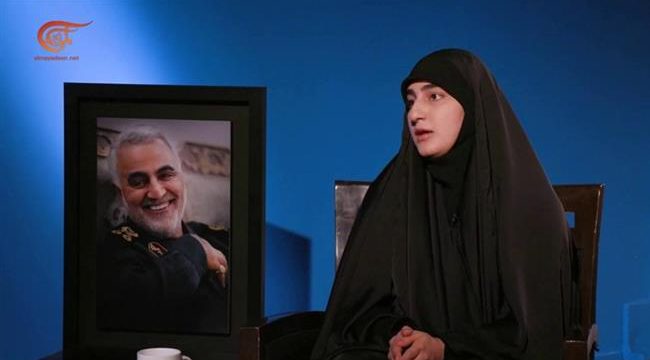 Martyred Major-General Qassem Soleimani’s daughter said in an interview with Lebanese Al-Mayadin TV on Tuesday night that both our people and the Palestinian resistance should know that Martyr Soleimani’s heritage prohibits giving permission to the occupier Zionist regime to continue its occupation of Palestinians’ lands.

According to IRNA Foreign Media Monitoring Desk, Zeinab Soleimani said, “My late father was the commander of an armed force (the Quds Force of Islamic Revolution Guard Corps – IRGCQF) one of those ideals is the liberation of Palestine from Israeli occupation.
She said that the Palestinian people’s ideals mattered very much for Martyr Soleimani and today we see how the Palestinians’ might has shattered the foundations of the occupier regime of Quds and terrified the Israeli regime.
Martyr Soleimani’s brave daughter said, “My later father set the foundations of resistance in Iraq, Syria, Palestine, Lebanon and even in Iran and by his continuous support for all of them he both continually and effectively nurtured and strengthened them.”
Zeinab Soleimani added: Haj Qassem was a strong military commander at the battlefields with broad popularity both inside and outside Iran. “He was very influential and talented as well, and yet he had a very kind heart and I believe his exemplary success was verily due to his kind and loving heart.
“My father was not merely a political and military commander to issue commands and tell his forces what to do and what not to do, as he knew how to penetrate and rule in people’s hearts, including the hearts of his own forces,” she added.
She described his late father’s relations with the Lebanese Hezbollah Leader Seyyed Hassan Nasrallah as “a brotherly love” and his love for the Supreme Leader of the Islamic Revolution as “I believe Ayatollah Seyyed Ali Khamenei resembled the artillery blood vein of Martyr Qassem Soleimani.”
“Haj Qassem’s entire life was associated with high-level threats, as anywhere he went lots of enemies had launched an ambush against him in advance. Once two US fighter jets tried to target the plane carrying Haj Qassem and his only bodyguard was Martyr Reza Khorrami,” added Zeinab Soleimani.
She said that Martyr Soleimani was simultaneously both the commander and a soldier at the battlefields and always welcomed martyrdom. “One of the reasons why Haj Qassem strongly and mightily entered Syria was his strong belief that Syria, Lebanon and Iran are very closely interlinked and that the borders of the (Islamic) motherland are threatened.”
Zeinab Soleimani added, “My late father considered (the Syrian President) Bashar al-Assad a very brave leader who cares much about his people and loves them very deeply.
“Haj Qassem used to say that (President) Bashar al-Assad stood strong despite the entire threats and mightily defended his people and his country,” she said, adding, “My late father simultaneously defended Syria and Iran, and in his beliefs, there was no difference between the people of Iran and the Lebanese, Syrian, Palestinian and Yemeni people,” she concluded.

Lebanon’s al-Mayadeen tv, Soleimani assassination, Zeinab Soleimani December 30, 2020
Iran to use frozen funds in Iraq to buy vaccine: Energy Minister
US responsible for consequences of any adventurism in region: Iran FM to Qatar