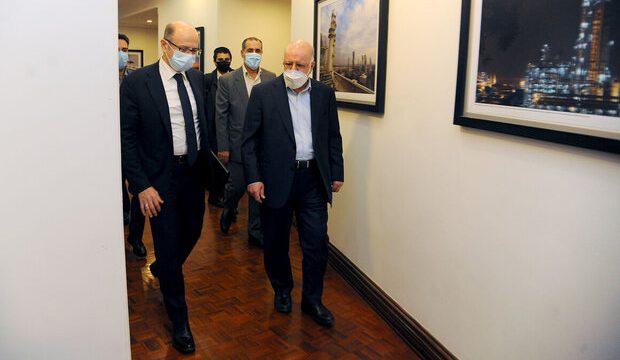 Speaking prior to his meeting with Minister of Energy of the Azerbaijan Republic Parviz Shahbazov, Zanganeh said the relations between Iran and Azerbaijan as two neighbors are at an excellent level and, God willing, will continue.

“I thank Azerbaijan for its position and active presence in OPEC+,” he said.

He further said that, fortunately, OPEC+ measures have worked so far, expressing optimism that the group, comprising members of the Organization of the Petroleum Exporting Countries (OPEC) and their allies, will be able to keep oil prices at a reasonable level.

“I appreciate the export of Iranian gas to Nakhchivan,” said Zanganeh.

For his part, Parviz Shahbazov, Minister of Energy of Azerbaijan Republic, said, “There are friendly and close relations between Iran and Azerbaijan, and the presidents of the two countries have held numerous meetings over the past seven years.”

He said, “I thank Iran for its work in OPEC+. As part of this coalition, we were able to resolve the crisis facing the oil market in April 2020.”

“The OPEC+ mechanism is a good tool for restoring the market in this situation, but for it to be effective, the coalition must be developed,” the Azerbaijani official said.

He also said it is true that action is being taken by OPEC+ members, taking, “but the crisis still remains.”

“Azerbaijan needs natural gas for power generation and I hope we can use Iranian gas; I also appreciate the export of Iranian gas to Nakhchivan,” Shahbazov said.

Following the meeting, Bijan Zanganeh said, “We discussed the Tehran-Baku bilateral relations and the developments in the oil market with the Minister of Energy of Azerbaijan.”

“Azerbaijan is an active and useful member of OPEC+,” he said.

The Iranian Minister of Petroleum went on to add that Iran has close relations with Azerbaijan and that, “we cooperate in the field of oil in OPEC+.”

The Minister of Energy of Azerbaijan also appreciated the positions of the Islamic Republic of Iran during the recent problems in his country.

“We hope that the cooperation between the two countries will develop,” he said.