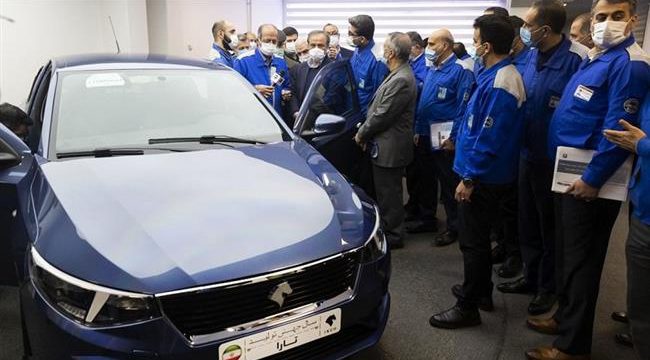 Iran’s leading automotive company has unveiled a new home-made car amid a surge in domestic output of various car models that many attributes to the growing indigenization of the industry as a result of US sanctions.

Iran’s minister of industries Alireza Razm Hosseini was at a production plant of the Iran Khodro Company (IKCO) on Saturday to unveil Tara, a sedan that some 92 percent of its parts will be manufactured by Iranian suppliers.

Tara, which means star in Persian, will kick mass production in February, according to the IKCO.

The company will partner with a consortium of 132 Iranian parts makers to manufacture the car.

Its basic versions will come with a TU engine while other models will be equipped with an EF7 engine and an automatic transmission, said the company.

The semi-official Fars news agency said Tara’s body production platform will be one the most sophisticated in Iran and in the Middle East as it will use laser welding and cold metal transfer technologies.

The unveiling of Tara comes amid a boom in Iran’s domestic car manufacturing as a government report published on Thursday showed that car production in the country had surged by 27.3 percent year on year in November.

The report showed that total output of domestic cars had reached nearly 622,000 units in the eight months to November 20, up from nearly 489,000 units produced in the same period in 2019.

IKCO has also seen its output grow significantly this year as the company moves to reach a record production of 3,000 cars per day.

IKCO officials said on Friday that the company’s nine-month output will exceed that of the entire calendar year ending March 2020.