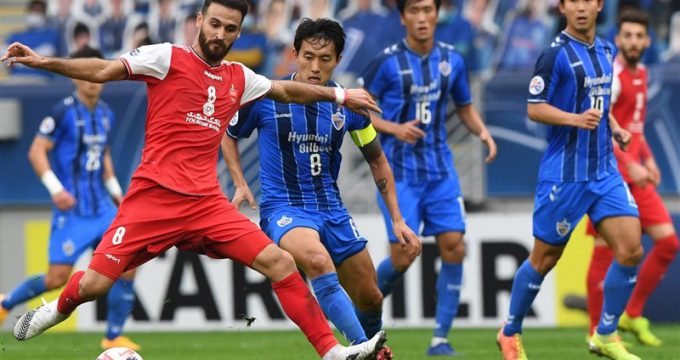 Champion in 2012, Ulsan Hyundai came into the final with the momentum of an impressive run of eight consecutive wins.

Meanwhile, 2018 runner-up Persepolis boasted a mean defense that had conceded just two goals since the competition’s resumption in October, with both being penalties.

As the first half looked headed to a close, the game erupted into life; Ulsan Hyundai defender Park Joo-ho lost his balance and allowed Mehdi Abdi to steal the ball deep into the opposition half and drill home Persepolis’ first goal of the afternoon in the 45th minute.

In the immediate aftermath of the goal, the Koreans threw men forward in an attempt to equalize before the break and Ahmad Noorollahi’s clumsy challenge on Yoon saw Ulsan Hyundai awarded a penalty after VAR review. Negrao’s effort from the spot was denied by Lak, but the Brazilian pounced on the rebound to slot home the leveler with the last kick of the half.

The second half picked up right from where the first ended, with Mehdi Shiri handling a cross inside the box and another VAR check helping referee Abdulrahman Al Jassim award a second penalty for Ulsan.

Negrao made no mistake from the spot this time to add his seventh of the campaign, moving level with Abderazzak Hamdallah at the top of the scoring charts.

Persepolis looked to respond and dominated possession for extended spells of the second half, but was limited in terms of clear-cut chances. Abdi headed wide under pressure and Noorollahi came closest, testing Jo So-huk from 30 yards out in the 67th minute in what would prove to be the Iranians best opportunities until the final whistle.

Ulsan Hyundai’s second continental victory marks the sixth time a Korean side has won the AFC Champions League since its rebranding in 2002-03 and the first since Jeonbuk Hyundai Motors’ triumph in 2016.