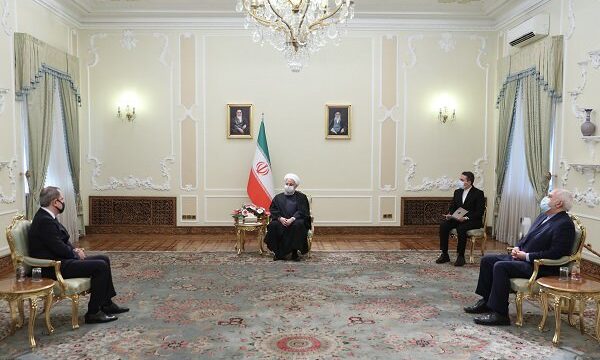 Iranian President Hassan Rouhani announced the country’s readiness to play a role in helping to strengthen the ceasefire between Azerbaijan and Armenia and to stabilize the region.

He made the remarks in his meeting with Minister of Foreign Affairs of Azerbaijan Jeyhun Bayramov on Wednesday.

Referring to the clear positions of the Islamic Republic of Iran in the Nagorno-Karabakh conflict and support for the territorial integrity of the Republic of Azerbaijan, Rouhani expressed satisfaction with the end of the war between the two countries and the liberation of the occupied territories of Azerbaijan and the establishment of a ceasefire.

He pointed to Iran’s plan for ending the Nagorno-Karabakh conflict by sending a special envoy to Russia, Azerbaijan and Armenia and announced the country’s readiness to play a constructive role in helping to strengthen the ceasefire between the two countries and establish stability in the region.

Emphasizing the need to use the borders of Iran and Azerbaijan to develop economic and trade cooperation, the Iranian president said, “With the end of the Trump era in the United States and the coming to power of the new administration in this country, we feel that countries will have better conditions for cooperation.”

Referring to previous agreements between Iran and Azerbaijan, including the Rasht-Astara railway project, the President stressed the need to accelerate the implementation and operation of the agreements.

“Conditions are in place for the implementation of joint cooperation projects agreed between the two countries, including the Khoda Afarin Dam and the construction of a power plant,” he said, adding, “The two countries can further develop their cooperation in the fields of industry, science, pharmacy and other sectors.”

Appreciating the support of the Islamic Republic of Iran for the territorial integrity of Azerbaijan, Jeyhun Bayramov, for his part, said, “We consider Iran as our good friend and neighbor, and the will of the President and Azerbaijani officials is the comprehensive development of relations with Iran.”

Referring to the liberation of the occupied territories of this country and the revival of 132 km of border with Iran, he added, “Azerbaijan’s border with Iran is a border of friendship and development, and we believe that the revival of these borders can create new cooperation projects for the two countries.”

He emphasized the development and deepening of relations with Iran in political, economic and trade fields, saying, “The implementation of the Rasht-Astara railway project will increase economic and trade cooperation between the two countries.”

Bayramov expressed hope that with the new international conditions and the removal of existing obstacles caused by US sanctions, joint cooperation projects between the two countries will be implemented and operational quickly.