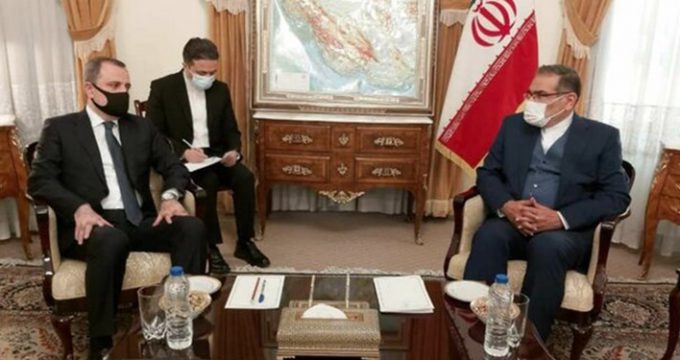 Secretary of Iran’s Supreme National Security Council (SNSC) Ali Shamkhani in a meeting with Azeri Foreign Minister Jeyhun Bayramov in Tehran on Wednesday underlined the need for the regional states to prevent measures that create new centers for insecurity.

He expressed satisfaction with the establishment of peace between the two countries of Azerbaijan and Armenia and the return of the occupied territories to the Azeri mainland.

Shamkhani also wished success for the government and people of Azerbaijan in the path of growth and development.

The Iranian official stated that Tehran-Baku relations should be upgraded to the highest possible level.

He noted that the completion of joint projects and the implementation of agreements between the two countries as well as starting new mutual cooperation in various fields requires more serious efforts.

Shamkhani pointed to Iran’s experience and technical and engineering capabilities and declared his country’s interest in participating in the reconstruction of war-torn areas of Azerbaijan.

Bayramov, for his part, expressed gratitude for the principled policy of the Islamic Republic of Iran towards the Karabakh crisis and appreciated the wise positions of the Leader of Iran Ayatollah Khamenei in support of putting an end to the occupation and crisis.

Referring to the determination of the top officials of the two countries to develop and strengthen relations between Tehran and Baku, Bayramov announced the readiness of the Republic of Azerbaijan to improve bilateral ties with Iran in various fields.

He also extended his condolences over the martyrdom of the top Iranian nuclear scientist Mohsen Fakhrizadeh, and strongly condemned this terrorist act.

Bayramov who arrived in Tehran on Wednesday met and held talks with his Iranian counterpart Mohammad Javad Zarif and President Hassan Rouhani.

During the meeting, Rouhani announced the country’s readiness to play a role in helping to strengthen the ceasefire between Azerbaijan and Armenia and to stabilize the region.

The visit focuses on deepening Iran-Azerbaijan ties in the post-Karabakh-war period, as well as reviewing the latest regional and international developments.

Bayramov is scheduled to meet with Speaker of Parliament Mohammad Baqer Qalibaf too.