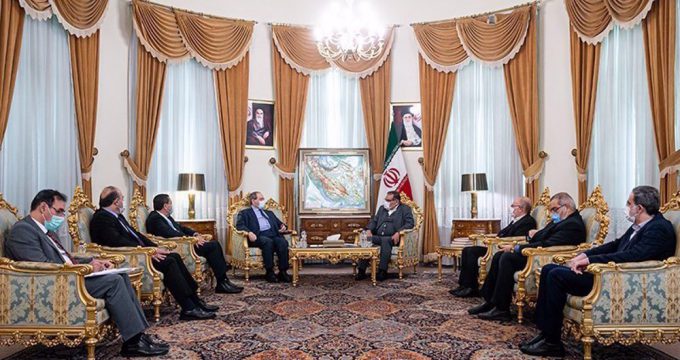 World will be safer without Israeli regime: Iran’s Shamkhani

Secretary of Iran’s Supreme National Security Council Ali Shamkhani called for global and concerted action against the inhumane activities of the Zionist regime, without which, he said, the world will become safer.

In a meeting with Syria’s Foreign Minister Faisal Mekdad in Tehran on Tuesday, Shamkhani said the Zionist regime’s raison d’être and existence are based upon terror and violation of human rights.

He called on the international community and organizations to take decisive action against the “bloodsucking and anti-human” Zionist regime to create a safe and calm world.

“The world will undoubtedly become safer without the Zionist regime,” Shamkhani added.

The rulers that are humiliatingly pushing for the normalization of ties with the fake Zionist regime and are helping the US to implement its plots in the region will suffer the same fate as Muammar al-Gaddafi and Omar al-Bashir, the Iranian official warned.

Shamkhani also said that the US presence in Syria is aimed at plundering the Arab country’s oil resources, protecting the security of Israel, and reinforcing Daesh terrorist cells across the region.

“The US’ evil presence in the region must end,” he stated.

Shamkhani also lauded the perfect level of strategic ties between Tehran and Damascus, praised Syria for its major and leading role in regional resistance against the Israeli occupation and expansionist policies, and stressed the need for the continuation and promotion of relations between Iran and Syria.

Syria’s new foreign minister has traveled to Iran on his first foreign trip after taking office.