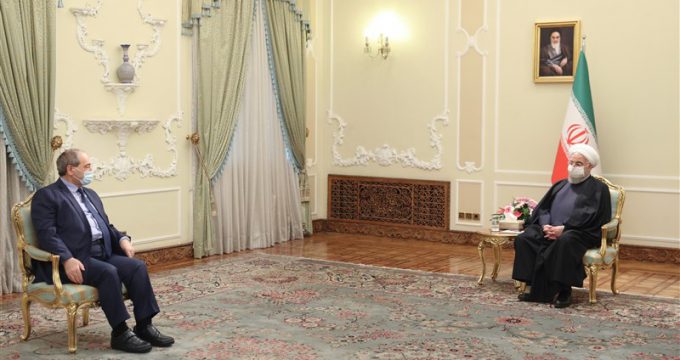 Rouhani says Iran to stand by Syria until achieving victory

President Hassan Rouhani stated that the Islamic Republic of Iran will stand by Syria until achieving the final victory, stating that Iran considers Astana Peace Process ‘useful’ in maintaining interests and territorial integrity.

Speaking in his meeting with visiting Syrian Foreign Minister Faisal Mekdad on Tue., Rouhani expressed his condolences on the passing of former Syrian Foreign Minister Walid Moallem and added, “Amicable and friendly ties between Tehran and Damascus founded after the victory of Islamic Revolution in 1979 during the late founder of the Islamic Revolution Imam Khomeini (RA) and the late Hafez Assad.”

Today, the amicable ties between Iran and Syria continue to be strengthened by the officials of the two states, Rouhani added.

President Rouhani termed confrontation with the Zionist occupiers and terrorism ‘a common goal of the two nations of Iran and Syria’ and said, “There is no doubt that we must continue our resistance and perseverance until the complete annihilation of terrorists from the region.”

The main purpose of terrorism and sanctions is to put pressure on the legitimate and independent nations and governments of the region, so “We fully understand the situation of Syrian people in the face of sanctions, because, we have experienced the worst sanctions in the last three years.”

Syrian foreign minister, for his part, called Tehran-Damascus relations one of the most valuable and honorable political relations in the world and said, “We believe that other countries should learn how to build a real relationship and friendship and how this amicable ties can be continued strongly.”

He expressed his condolences on the martyrdom of Iranian prominent nuclear and defense scientist ‘Dr. Mohsen Fakhrizadeh’ and added, “Those who commit such heinous crime do not know that such terrorist act will make us more determined in achieving victory and Syrian people will never forget the sacrifices of martyr Lt. Gen. Soleimani in the fight against ISIL in Syria.”