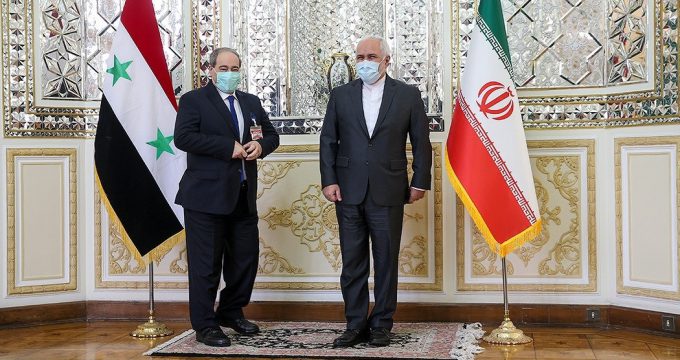 Zarif made the remarks in a Monday meeting with Syria’s newly-appointed Foreign Minister Faisal al-Mekdad, who is in Tehran on his first foreign visit to hold talks with senior Iranian officials.

In light of recent conditions and developments in the region, Iran’s top diplomat told his Syrian counterpart, it is necessary for Iran, Syria and other countries to remain vigilant and continue consultations more than ever before.

During the meeting, the Iranian foreign minister also hailed the continuation of the political process in Syria and reaffirmed Iran’s support for the Astana peace process.

Iran, Russia, and Turkey have been leading a peace process for Syria known as the Astana process, because Kazakhstan’s capital, Nur-Sultan, formerly called Astana, originally hosted the meetings.

A first deal was signed in Kazakhstan’s capital, arranging for the creation of de-escalation zones across Syria, including in parts of Idlib. The second one that came about in the Russian resort city of Sochi allowed Ankara to bring in a small number of forces to man the observation posts to reinforce de-escalation.

While the two deals have helped significantly reduce fighting in Syria, the conflict has not entirely ended, due in large part to Turkish failure to separate terrorists from what it calls “moderate” opposition groups in Idlib and Ankara’s dispatch of thousands of troops and heavy military hardware into the Syrian province to back the militants.

e Iranian foreign minister and his Russian and Turkish counterparts, Sergei Lavrov and Mevlut Cavusoglu respectively, in April emphasized the need to continue consultations and coordination among the three guarantors of the Astana process as the most effective format for the settlement of the crisis in Syria.

The conference, which began on November 14, was inaugurated with a speech by Syrian President Bashar al-Assad who blamed the United States for hampering the return of refugees to Syria.

“Today we continue working persistently for the return of every refugee who wants to return and participate in the restoration of the homeland,” Assad said, adding, “But there are big obstacles.”

The Syrian foreign minister, for his part, commended Iran’s constant support for his country in the fight against terrorism and extremism, saying that US measures are escalating tensions in the region and serve the Zionist regime’s interests, which Washington pus above the interests of the American people.

Mekdad added that the Syrian government is determined to continue the battle against terrorism and added that cooperation between Damascus and Tehran plays a leading role in this regard, which can also help restore peace and tranquility to Syria.

During the meeting, the top Iranian and Syrian diplomats also discussed mutual, regional and international developments and the joint campaign against terrorism.

Pointing to broad and strategic bilateral relations, Zarif and Mekdad stressed the importance of further promotion of ties, particularly in the economic sector.

Mekdad arrived in the Iranian capital on Sunday. He assumed the position last month after his predecessor Walid al-Muallem passed away.

The Islamic Republic was the first country to rush to the Arab country’s assistance after the latter found itself in the grip of foreign-backed militancy and terrorism in 2011.

Tehran has vowed to sustain its backing for Syria’s efforts to protect its sovereignty in the face of regional and extra-regional efforts to destabilize the country and use it as a launchpad to further destabilize regional activity.