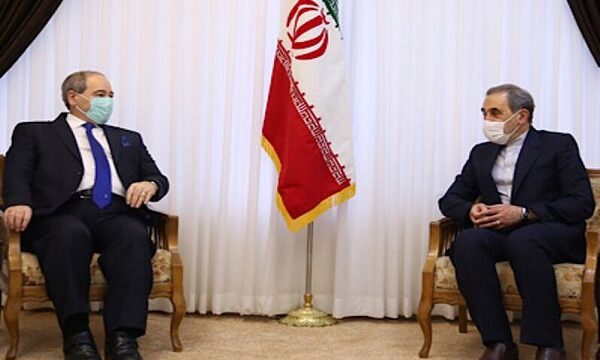 Adviser to the Leader of Islamic Revolution for International Affairs said that Syria plays a very crucial and decisive role in the Resistance Front.

Speaking in his meeting with visiting Syrian Foreign Minister Faisal Mekdad to Tehran on Monday, Ali-Akbar Velayati reiterated that Syria plays a very fundamental and determining role in the Resistance Front.

During the meeting, the two sides exchanged their views on the regional issues and bilateral relations.

While paying tribute to the late former Syrian Foreign Minister Walid Moallem, Velayati emphasized the resistance and perseverance of the great nation of Syria against will-wishers and enemies and added, “This resistance and endurance strengthened the Axis of Resistance in the region and thwarted malicious plots and nightmares of enemies, especially for the Syrian people.”

Elsewhere in his remarks, he stressed the need to develop and expand bilateral relations and added, “The strategic relations between the two countries is strengthening day by day and this process serves interests of the two countries that should be pursued seriously.”

Undoubtedly, Syria has a fundamental and decisive role in the resistance front and has paid a heavy price for playing this role, Leader’s adviser underscored.

Then, he pointed to the recent terrorist act resulted in assassination of Iranian prominent nuclear scientist, Martyr Mohsen Fakhrizadeh and emphasized, “There is no doubt that heinous act committed by enemies of the country will not go unanswered and Iran will respond to it harshly.”

The visiting Syrian foreign minister also praised the key role of Leader of the Islamic Revolution Ayatollah Khamenei in strengthening and expanding relations between the government and people of Iran and Syria and stressed that the Iranian Leader played a very constructive role in the region.