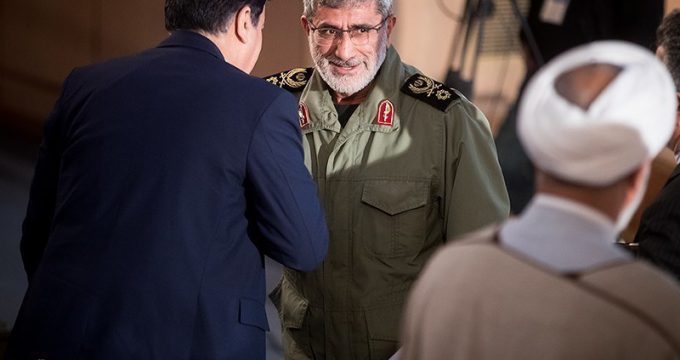 In an interview with Al-Alam News Network, Iranian envoy to Baghdad Iraj Masjedi said General Qaani continues the same mission pursued by his predecessor, Lt. General Qassem Soleimani, who was assassinated in an American attack in Iraq in early January.

The interaction between Iran and Iraq has not changed after the martyrdom of General Soleimani, the ambassador noted, saying General Qaani also pays visits to Baghdad in coordination with the Iraqi authorities to hold meetings with the Iraqi president, prime minister, political and party officials, and various figures.

In his recent visit to Iraq, the IRGC Quds Force commander held talks with many Iraqi officials, Masjedi said.

The envoy further denounced the US presence as the source of threats to the region, saying American interference that causes regional insecurity must end with the withdrawal of US forces.

Masjedi also warned the US that the mistake of taking any action on Iran will draw a decisive response from Tehran.

Describing self-defense as an inalienable right, the ambassador cautioned the US against the reaction it will receive in case of a wrong move against the resistance currents, leaders and bases.

Iraq’s anti-terror Kata’ib Hezbollah group, a faction of the country’s Popular Mobilization Units (PMU) or Hashd al-Sha’abi, warned last month that a “tougher and stronger” confrontation awaits US forces should they defy a timetable set for their withdrawal from the Arab country.

Just two days later, Iraqi lawmakers unanimously passed a bill mandating the expulsion of all foreign troops from the country.

Washington, however, has threatened sanctions should US troops be expelled from Iraq instead of ending the occupation of the Arab country.