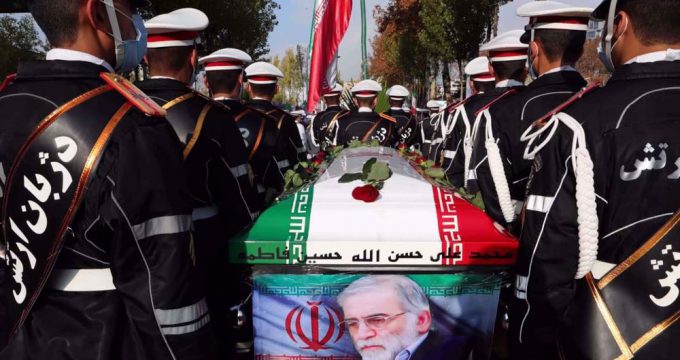 Iran’s top nuclear scientist Mohsen Fakhrizadeh has been laid to rest three days after his assassination outside Tehran, with the country’s defense minister pledging to continue his work “with more speed and more power.”

He was buried at Imamzadeh Saleh mosque in Tajrish in northern Tehran’s Shemiran district on Monday after a detailed funeral ceremony was held in the morning.

The cortege began at the Ministry of Defense in east Tehran, with top state and military officials on hand to pay their respect to a man who played a leading role in bolstering Iran’s defense power and advancing its nuclear energy program.

An honor guard carried the casket containing his remains which reportedly received three shots during an ambush in a boulevard in Absard where assailants blew up an explosives-laden Nissan truck before targeting him and his security detail in a hail of bullets.

The remains of the weapon used in the assassination show that it was made in Israel, an informed source told Press TV Monday. The weapon collected from the site of the terrorist act bears the logo and specifications of the Israeli military industry. 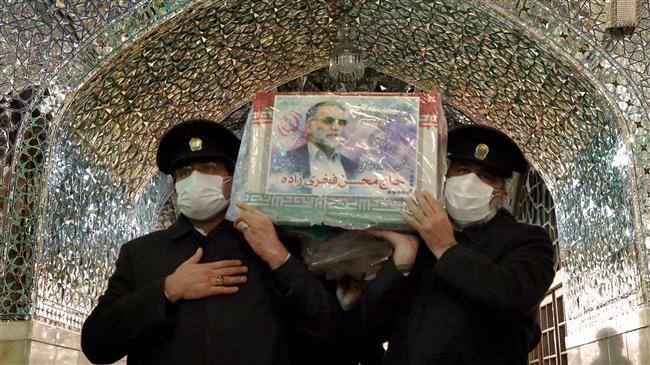 A handout picture provided by Iran’s Defense Ministry on November 29, 2020 shows servants of the Imam Reza holy shrine carrying the coffin of Iran’s assassinated nuclear scientist Mohsen Fakhrizadeh during his funeral procession in the northeastern city of Mashhad.

Iran’s Ministry of Defense also said it had obtained “new leads” on the identity of the perpetrators and that the information “will be publicized very soon.”

At an outdoor portion of the Defense Ministry, the Islamic Revolution Guards Corps (IRGC) chief Gen. Hossein Salami, the IRGC’s Quds Force head Gen. Esmail Qa’ani, head of the Atomic Energy Organization of Iran Ali Akbar Sahei and Intelligence Minister Mamoud Alavi sat apart from each other and wore masks due to the coronavirus pandemic as a reciter read several verses of the holy Qur’an.

A message was read out to the ceremony from Leader of the Islamic Revolution Ayatollah Seyyed Ali Khamenei, who has ordered officials to identify and punish the perpetrators of the crime and continue his scientific path with diligence.

Defense Minister Gen. Amir Hatami put his forehead against the casket and kissed it before addressing the ceremony, pledging that the assassination would make Iranians “more united, more determined.”

“For the continuation of your path, we will continue with more speed and more power,” Hatami said.

Hatami also called the nuclear arsenal of the US and the stockpile of atomic bombs Israel which is widely believed to possess at least 200 warheads “the most dangerous threat against humanity.”

On Sunday, Fakhrizadeh’s body was flown to the holy city of Mashhad, where it was taken inside the holy shrine of Imam Reza (AS), the eight infallible imam of Shia Muslims.

It was then transferred to the holy city of Qom for a visit to the shrine of Fatima Masoumeh, the sister of Imam Reza (AS) and to the mausoleum of the late founder of the Islamic Republic Imam Khomeini outside Tehran.

Secretary of Iran’s Supreme National Security Council said the enemies had launched “a number of failed operations” against Fakhrizadeh in the past.

“This time, the enemy applied a completely new, professional and sophisticated method,” he said.