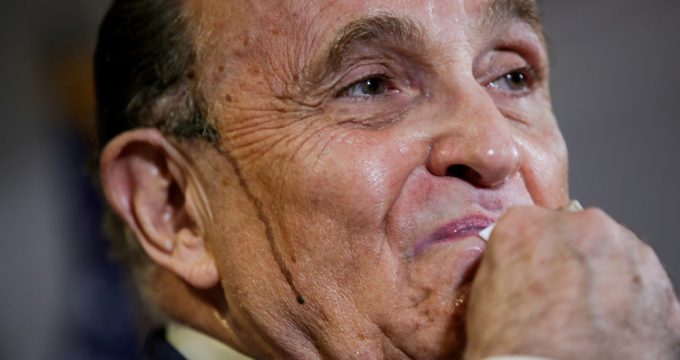 Iran says attempts by “devil’s advocate” Rudy Giuliani to defend anti-Iran terrorism have failed and the personal attorney to US President Donald Trump “is melting down, literally,” shortly after images of the American figure showing sweat darkened by what appears to be his hair dye running down his face during a presser were widely ridiculed.

Weeks after his boss’s election fiasco, Giuliani on Thursday held a chaotic press conference, during which he touted claims, as he was sweating profusely, that Trump’s votes had been “stolen” in the recent presidential election and that Democratic candidate Joe Biden’s win against Trump was fraudulent.

However, what grabbed headlines were not his election-related claims. The viewers and media were instead drawn to his agitated performance, featuring what appeared to be rivulets of hair dye flowing down his face.

In a tweet on Friday, the Iranian Foreign Ministry used the scenes from Giuliani’s press conference to highlight the lawyer’s years-long abortive schemes against Iran, including attempts to bring about a regime change in the country by supporting a notorious terror group that has the blood of thousands of Iranians on its hands.

“Probably American public is surprised seeing Giuliani defending a lying, terrorist tyrant in exchange for big $$,” said the tweet. “Not news to Iranians.”

“For years he’s been a devil advocate, pocketing $$ by whitewashing despicable crimes of terrorists,” said the tweet, in an apparent reference to members of the Mujahedin-e-Khalq Organization (MKO) terrorist group.

“He’s melting down, literally!” it added.

The MKO terror group has cultivated close ties with Giuliani, among other close allies of Trump. The former New York City mayor has been among the guest speakers of the terrorist outfit’s events in Europe, where he took the podium to speak against the Islamic establishment in Iran.

Giuliani reportedly helped get the MKO off America’s terror list in exchange for a big sum of money.

Not news to Iranians.

For years he’s been a devil advocate, pocketing $$ by whitewashing despicable crimes of terrorists.

In a separate tweet on Friday, Saeed Khatibzadeh, spokesman of Iran’s Foreign Ministry, took aim at another Trump lieutenant, Secretary of State Mike Pompeo, and chastised him for adhering to a doctrine that has harmed the interests of the American people to serve an occupying entity.

He offered a bullet-point list of the basics of Pompeo’s doctrine and wrote, “Put Bibi’s interest above that of even Americans who put him in office; Formalize Israel’s occupation & whitewash Israeli crimes — no matter what; Silence criticism with bogus ‘anti-Semitism label’; Waste US taxpayers money on private family tours.”

– Put Bibi’s interest above that of even Americans who put him in office;
– Formalize Israel’s occupation & whitewash Israeli crimes- no matter what;
– Silence criticism with bogus ‘anti-Semitism label’;
– Waste US taxpayers money on private family tours pic.twitter.com/vCRuy4rBvA

The tweet was accompanied by a photo of Pompeo walking alongside Israeli Prime Minister Benjamin Netanyahu during a trip on Thursday to the occupied West Bank, where he paid a highly-contentions visit to an Israeli settlement built on Palestinian land.

In a major policy shift, Pompeo voiced support for products from the unlawful settlements during the visit and said the US would brand the international Palestinian-led boycott movement against Israel as “anti-Semitic.”

The visit was interpreted as the Trump administration’s acceptance of Israeli settlements, which the Palestinians and the international community view as a violation of international law.