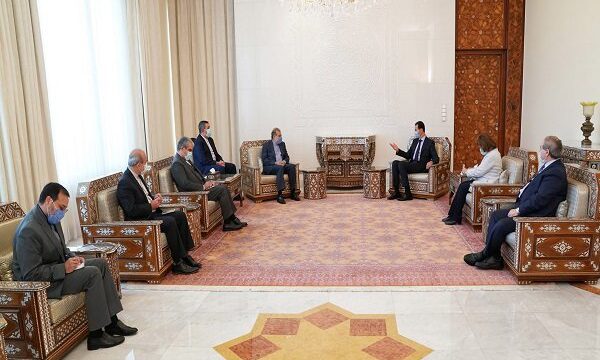 According to SANA, President al-Assad on Tuesday received Ali Asghar Khaji, senior assistant to the Iranian Foreign Minister, and an accompanying delegation.

Talks during the meeting concentrated on the International Conference on the return of Syrian Refugees to be held in Damascus as President al-Assad was briefed by the Iranian delegation on the vision of Iran towards this conference and its readiness to offer any support that could contribute to making it a success and solving this humanitarian file.

The Iranian delegation stressed that the improvement of security conditions on the Syrian territory to a large extent and the efforts exerted by the Syrian government to reconstruct what has been sabotaged by terrorism constitutes a strong basis to set off towards the return of all refugees.

Al-Assad affirmed that the conference will be an essential step in the track on which the government acts to end this file, particularly as the conference will propose the exchange of views and ideas  with a number of regional and international parties.

The President stressed that the refugees cause is a Syrian one, but the solution to this issue does not depend only on the Syrian government, but also on the extent of fairness of some countries that claim they defend  human rights, but at the same time, they do not care to the difficult conditions  that the refugees have lived throughout all these years and they are working  hard to politicize this file and keep the refugees outside the Syrian territory as long as possible to exert pressure on the county.

The two sides also exchanged view points on a number of issues of political concern, including Astana talks on Syria and the Committee of Discussing the Constitution.