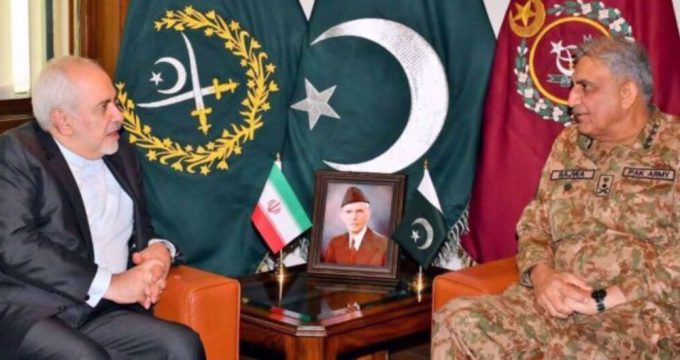 During a meeting in Islamabad on Wednesday, Zarif and General Bajwa discussed issues of bilateral significance, including the fight against terrorism, strengthening defense and border cooperation, and expanding military relations between Iran and Pakistan.

They also exchanged views on the latest security developments in the region, especially the situation in Afghanistan.

The two sides further stressed the need for developing all-out cooperation between Tehran and Islamabad, particularly in the field of security and protection of common frontiers, which have been named the borders of peace and friendship.

The top Iranian diplomat is scheduled to meet with his Pakistani counterpart, Shah Mahmood Qureshi, later in the day.

Zarif will then hold talks with Pakistani Prime Minister Imran Khan and deliver a speech at the Institute of Strategic Studies Islamabad (ISSI).

Heading a political-economic delegation, Zarif arrived in Pakistan on Tuesday to discuss bilateral and regional issues with Pakistani officials.