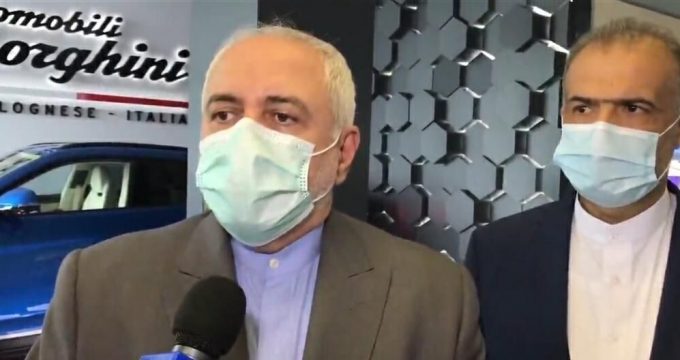 Future of JCPOA depends on US behavior: Zarif

Foreign Minister of the Islamic Republic of Iran Mohammad Javad Zarif while expressing his views about future of the JCPOA with new US administration coming into power said it depends on the behavior of the United States.

Talking to IRNA soon after his arrival in Pakistan on Tuesday evening he said Iran is waiting to see a change in US behavior.

Commenting on the victory of Joe Biden in the US election, he said personalities are certainly important but what is important is the behavior and the actions and we are waiting to see that.

Zarif talking to reporters said talks with Pakistan as a special neighbor always continue and these consultations are held periodically.

Referring to the delay in the ongoing talks between the two countries due to the coronavirus pandemic, he said: “Today we are very happy to have the opportunity to visit Islamabad again.”

The Iranian Foreign Minister said: “We will discuss issues such as bilateral relations, border, regional and international cooperation, including Afghanistan, with our Pakistani friends.”

“The situation in the Islamic world is a common issue and concern of Tehran and Islamabad, and both countries are following it sensitively in the face of the normalization of relations between some countries and the Zionist regime,” he said.

Zarif added:  Iran and Pakistan have always cooperated closely with each other on different issues and the current visit gives us an opportunity to examine this cooperation.

** Iran-Pakistan capacities yet to be explored

Regarding the current level of relations between the Islamic Republic of Iran and Pakistan, especially in the economic and trade sectors, Zarif said “we are satisfied with our relations”.

“But we believe the potential for Iran and Pakistan, particularly in the area of trade, is far greater than what we have been able to take advantage of it,” said the minister.

**Need to take common position against compromise with Zionist regime

Reacting to the conspiracy to normalize relations with the Zionist regime by some countries in the region, Zarif said the visit gives us the opportunity to consult with our Pakistani brothers, particularly in the light of the OIC meeting very shortly in Niger.

“There is a need to have a common view and common position on these issues,” he noted.

The Foreign Minister of the Islamic Republic of Iran arrived in the capital Islamabad a few hours ago heading a political and economic delegation to consult with high-ranking Pakistani officials.

He will also deliver a lecture at the Institute of Strategic Studies Islamabad (ISSI).