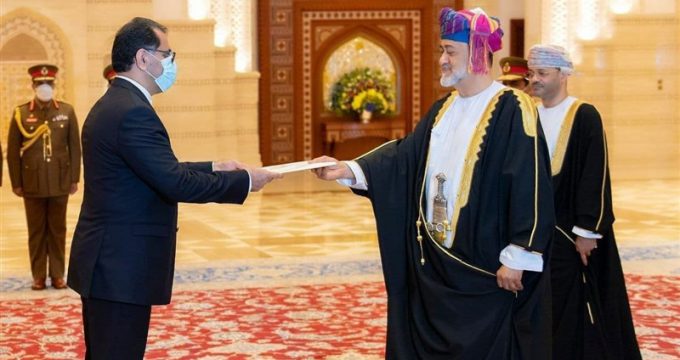 In a meeting with Iran’s new ambassador to Muscat on Sunday, the Sultan of Oman said his country is resolved to promote and strengthen relations with Iran.

The Omani leader also pledged support for the new Iranian envoy’s plans for the enhancement of cooperation between the two states.

In the gathering, also attended by the ministers of foreign affairs and interior of Oman, Iranian Ambassador Ali Najafi submitted his credentials, hailed the 50th anniversary of establishment of diplomatic relations between Tehran and Muscat, and expressed hope that the determination and prudent stances of the two countries’ top officials would bolster the friendly and brotherly ties between the two neighbors.

“Expansion of economic relations is my priority,” the envoy said about his mission to Oman.

In a telephone conversation with Sultan Haitham in April, Iranian President Hassan Rouhani stressed the need for collective action by all countries in the fight against COVID-19.

The president also voiced Iran’s readiness to provide the friendly and neighboring state with the experiences and achievements in the battle with COVID-19 and to offer whatever assistance necessary.