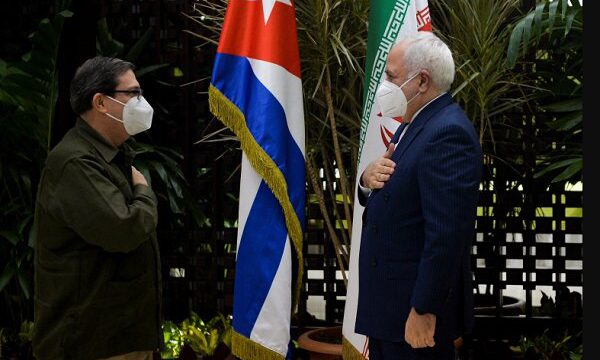 Iranian and Cuban Foreign Ministers discussed boosting bilateral cooperation in the scientific fields as well as political, economic, and international ones.

Iranian Foreign Minister Mohammad Javad Zarif, who has arrived in Havana on Friday in order to hold talks with Cuban officials, met with his Cuban counterpart, Bruno Rodriguez.

During the meeting, the two sides discussed and emphasized the development of bilateral cooperation in the political, economic, and international fields.

The two countries’ support for the Palestinian cause, bilateral cooperation in the fields of energy, nanotechnology, and biotechnology, as well as coordination between the two countries on issues related to Latin America and West Asia were among the issues discussed by the Iranian and Cuban foreign ministers.

Earlier, Zarif visited two medical and pharmaceutical study centers in Havana, including the CEA Center for Advanced Studies and the CIGB Center for Genetic Engineering and Biotechnology.

During Zarif’s visit to two Cuban medical and pharmaceutical research centers, the heads and directors of the two centers explained the progress made in the production of various vaccines, especially the Covid-19 vaccine.

The directors of the Cuban Ministry of Health and the Cuba Bio Pharma Center also reviewed Bio Pharma Cuba’s cooperation with the Pasteur Institute of Iran.

During this visit, the Cuban side announced its readiness to cooperate with the Iranian side in specialized fields.