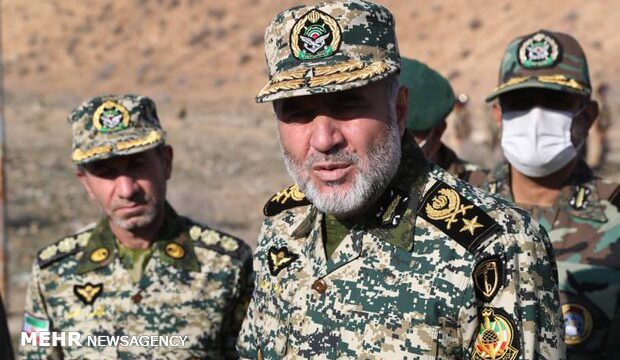 Iranian Army Ground Forces Commander said that Armed Forces will do their best to maintain the security and peace of border areas and will not tolerate the violation of international law.

Referring to the Nagorno-Karabakh conflict, Brigadier General Kiumars Heidari said that the Islamic Republic of Iran urges both sides to resolves their issues through a political settlement.

“Preserving the geopolitics of the region is our red line, and no power is allowed to change the geography of the region, and we will not tolerate this,” he noted.

He went on to say that Army Ground forces have been deployed in the border areas and they will make their best efforts to maintain the security and peace of the region.

“Armed Forces will do their best to maintain the security and peace of border areas and will not tolerate the violation of international law,” he stressed.

“Our red line is to ensure the security, peace, and comfort of the people,” he added.

Heidari further noted that no danger threatens the northwestern borders of the country and the Armed forces are ready to safeguard the Iranian people.

While emphasizing the need to respect the territorial integrity of regional countries, Brigadier general Heidari said, “Iran has a lot in common with both neighboring countries of Azerbaijan and Armenia and we advise both countries to respect international law, protect international borders and resolve their issues through a political settlement.”