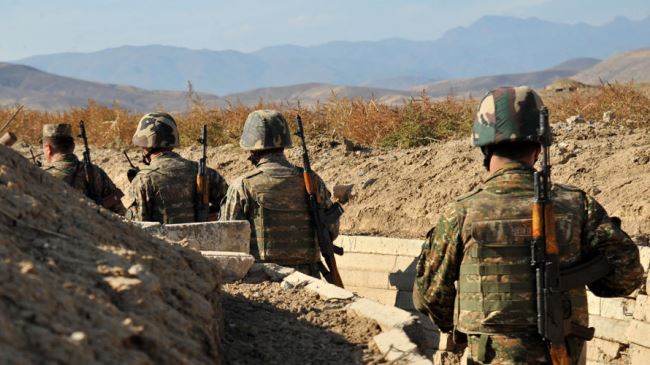 Russia is considering an Iranian proposal for ending the conflict between Azerbaijan and ethnic Armenian forces in the mountain enclave of Nagorno-Karabakh after three ceasefires failed to halt fighting that is now in its sixth week.

At least 1,000 people, and possibly many more, have been killed since fighting broke out on Sept. 27 in Nagorno-Karabakh, an enclave internationally recognised as part of Azerbaijan but populated and controlled by ethnic Armenians.

The worst fighting in more than 25 years has underlined the influence of Turkey, an ally of Azerbaijan, in the South Caucasus, a region that was once part of the Soviet Union and long dominated by Moscow, which has a defence pact with Armenia.

Russian news agencies reported last week that Iran had proposed a leading role in peace negotiations for countries in the region. Russia, it said, would be one of these countries.

Negotiations have for decades been led by Russia, France and the United States in their roles as co-chairs of a panel known as the Minsk Group of the Organization for Security and Co-operation in Europe (OSCE), a security and rights watchdog.

Within hours of an agreement being reached with the warring sides on Friday not to target civilians, attacks resumed, and concerns remain about the security of oil and gas pipelines in Azerbaijan.

Advances on the battlefield have reduced Azerbaijan’s incentive to reach a lasting peace deal and complicated international efforts to broker a ceasefire – in which Turkey wants a bigger role.

In an interview with Russian daily Kommersant, Lavrov also estimated around 2,000 mercenaries from the Middle East were fighting and called on “external players” to halt their arrival.

Fighting continued on Tuesday in multiple locations along the front line.

The ethnic Armenian-controlled Nagorno-Karabakh Emergency and Rescue Service said the enclave’s two largest cities, Stepanakert and Shushi, were being shelled and that a civilian was wounded as a result of an attack on a maternity hospital.

Azerbaijan said its positions on the border with Armenia had been fired on with mortar bombs and small arms and that the city of Fizuli, between Nagorno-Karabakh and Iran, had been shelled.

Armenia’s defence ministry denied the reported shelling of Fizuli and reported an attack – denied by Azerbaijan – in the direction of Karvajar, a town in the northwestern part of the conflict zone.

“Our military were not even able to put a flag on anything there, because there were no buildings,” he said in the capital, Baku. In Zangilan, they had found only a school for the children of military servicemen, he added.

Aliyev said he was considering opening a criminal investigation into what he said had been the destruction of many of the 700 historical buildings and monuments in the region.

The ethnic Armenian-controlled Nagorno-Karabakh defence ministry says 1,177 of its troops have been killed since Sept. 27. Azerbaijan does not disclose its military casualties, while Russia has estimated 5,000 deaths on both sides.