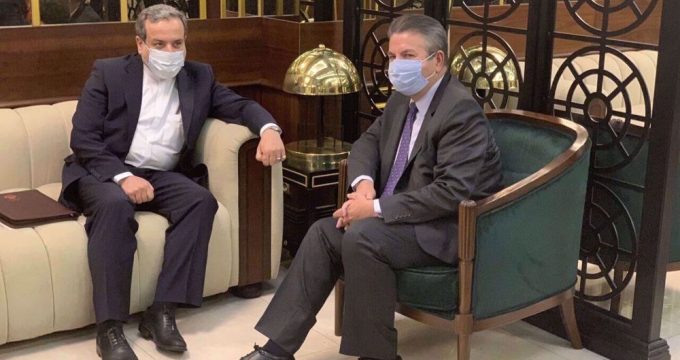 iranian Deputy Foreign Minister for Political Affairs Abbas Araqchi has travelled to Turkey on the last leg of his four-nation tour aimed at promoting Tehran’s initiative for the peaceful resolution of the conflict between Azerbaijan and Armenia over the Nagorno-Karabakh region.

Frank and productive discussion with Deputy Foreign Minister Sedat Önal in Ankara. Iran and Turkey are two major players with undeniable role in peace and stability of the region. pic.twitter.com/nYP4lBGxB3

The two sides discussed the situation in the South Caucasus region of Karabkh, where hundreds have been killed in more than a month of fighting between Baku and Yerevan.

The Iranian official began his regional tour on Tuesday and visited Azerbaijan, Russia and Armenia before his trip to Turkey.

Speaking to Russia’s RIA Novosti news agency, Araqchi stressed that Tehran’s peace plan is based on “a regional approach” with the participation of influential countries, including Russia and Turkey.

The proposal also takes into account the realities on the ground, he said, adding that three ceasefires have failed to bring peace to the Karabakh as they did not consider those realities.

Iran’s initiative calls on warring sides to abide by international rules such as respect for the rights of minorities and humanitarian rights as well as non-aggression against civilians and return of refugees. It further outlines a series of specific principles related to the Karabakh crisis, among them ending the occupation and observing territorial integrity and inviolability of borders, according to Araqchi.

He expressed hope that the plan could pave the way for lasting peace in the Nagorno-Karabakh enclave, noting, however, that it is not an easy task because of problems and foreign interference.

The Islamic Republic has always voiced its readiness to establish a truce, start dialog and restore peace given its good relations with Azerbaijan and Armenia and the critical condition in the region, he emphasized.

The escalation began on September 27 after Armenian separatists — who have been seeking to break the region away from Azerbaijan for around three decades — opened fire on Azeri soldiers. More than 1,000 people, including more than a 100 civilians, have reportedly died in the violence.

The fighting has been rated the worst to plague Nagorno-Karabakh since 1992, when Armenians invaded the region and forced Azeris into a retreat.

A number of stray shells and projectiles have crossed the Iranian border, prompting stern warnings from Tehran.

The Ground Force of Iran’s Islamic Revolution Guards Corps (IRGC) has deployed a mechanized brigade to protect the country’s northwestern border amid the ongoing clashes between the two former Soviet republics.