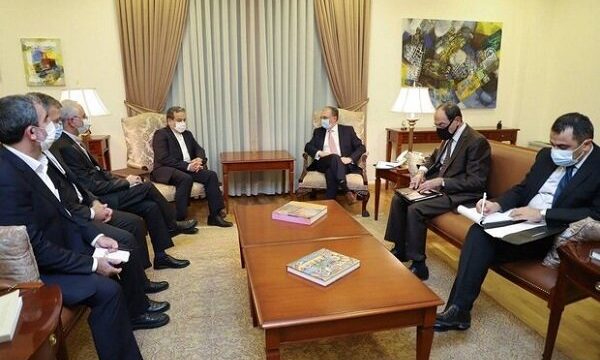 In a meeting with Iranian Deputy Foreign Minister for Political Affairs Abbas Araqchi, held in Yerevan on Friday, Mnatsakanyan said Armenia welcomes the role that Iran plays in maintaining regional peace and stability.

Armenia understands the sensitivity shown by the Islamic Republic to the new security threats to the region, the Armenian foreign minister noted, adding that his country is closely examining Iran’s stance on the Nagorno-Karabakh conflict.

For his part, Araqchi proposed Iran’s initiative for a ceasefire amid a new round of fighting between Yerevan and Baku, saying Tehran has the potential for cooperation in order to establish peace.

Speaking to reporters upon his arrival in Yerevan on Thursday evening, Araqchi said the initiative developed by Tehran for the settlement of the conflict between the Republic of Azerbaijan and Armenia over the Nagorno-Karabakh region would pave the way for peace.

“We held very intensive and fruitful talks in Baku and Moscow. We are going to negotiate with the Armenian officials as well to find a solution for peace,” he said.

“This is a quite delicate time, as a decision must be made immediately about establishment of peace and a way must be opened to peace,” Araqchi added.

“It’s a pity that the death toll (in Nagorno-Karabakh war) is rising. We believe that the way for peace must be paved as soon as possible, and the Islamic Republic of Iran’s proposal could open that way,” the deputy minister noted.

“Iran is a neighbor of both the Republic of Azerbaijan and the Republic of Armenia. Nationals from the both countries live in Iran in peace and calm with the Iranian citizens. Our stance has been always balanced and moderate,” he stated.

Iran is committed to a series of international principles amid the Nagorno-Karabakh crisis, Araqchi stressed, adding, “Iran’s goodwill and capacities could be employed in the path to peace, particularly a sustainable peace.”

“The Islamic Republic of Iran’s initiative is aimed at (creating) sustainable peace in the region,” he emphasized, stressing that Iran has the necessary capacities for ensuring peace in cooperation with the other countries.

Araqchi has travelled to Armenia after visiting Baku and Moscow. He is going to pay a visit to Turkey afterwards.