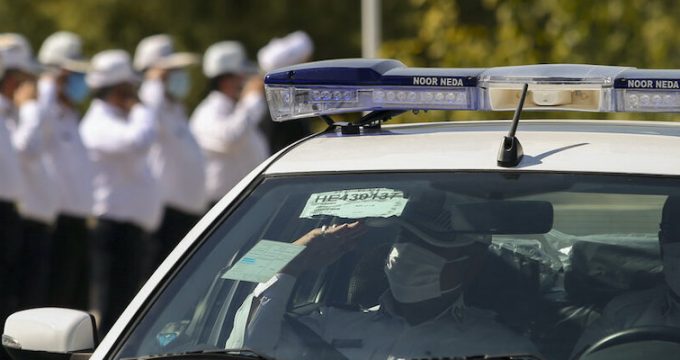 The Iranian authorities have arrested a police officer in connection with the death of a man after his arrest in the northeastern city of Mashhad, according to what was reported on Sunday by the “Mizan Online” website of the judicial authority.

The official IRNA news agency reported earlier Sunday that the police had opened an investigation into the case, after reports of the man’s death following the arrest.

The rare announcement of an internal investigation by law enforcement authorities and the arrest of one of its members came about two weeks after the judicial authority banned any form of torture and other illegal offenses, and its head, Ayatollah Ibrahim Raisi, criticized the recent practices of police personnel. .

Sunday evening, Mizan Online reported that “the agent involved in the death of a man after his detention, was arrested by order of the military prosecutor’s office.”

He added, “Two other officers, who took the victim to the police station, are under investigation.”

IRNA quoted Muhammad Kazem Taqawi, the police chief of Khorasan Razavi province, where Mashhad is located, as saying that the police had opened an investigation following media reports outside Iran “about the death of a man and (circulation) photos when the suspect was arrested, and the allegation that he was poisoned with a spray. Pepper.”

He added, “Special orders were issued (…) to quickly investigate the matter and clarify what happened and how,” expressing his regret for the “accident.”

According to the “Fars” agency, the video tape circulated on social networking sites shows “a policeman using pepper spray and an electric stun gun in response to the arrestee’s insults at him.”

It spoke of “allegations that the person died of asphyxiation as a result of exposure to pepper spray.”

Saturday, “IRNA” quoted an official in the judiciary authority for the province, as saying that the man’s family filed a complaint after his death.

According to the official, Mahdi Ikhlaqi, samples will be taken from the detainee’s lung after the autopsy “to analyze the effect of the spray on his death.”

In addition, “IRNA” clarified that “last week (Saturday is the beginning of the week in Iran), and after the police received a call about a dispute between a man and the family of his ex-wife (…) members of the police went to the place.”

It quoted Muhammad Reza Daneshur, Deputy Governor of Khorasan Razavi, as saying, “A family dispute occurred between the man and the father of his wife, and as a result the family asked the police to intervene,” explaining that the man “died (…) during his transfer” to its center.

In the middle of this month, the judiciary revealed orders banning torture, forced confessions, solitary confinement, illegal detention by the police, and other violations of the rights of the accused, according to a document published by the “Mezzan Online” website.

The document, which bore a major signature, stressed the “transparency” of the judicial process, including the right to free choice of a lawyer and the “presumption of innocence” principle.

It also guarantees foreigners the “right to communicate with the consulate” of their country.

The publication of the document came about a week after the spread of videos on the communication sites showing police officers dealing aggressively with people on board pickup trucks on a street full of pedestrians, which was reported in Tehran.

The detainees appeared in these clips, which caused widespread controversy, and they were forced to apologize for the “mistakes” that they say they committed.