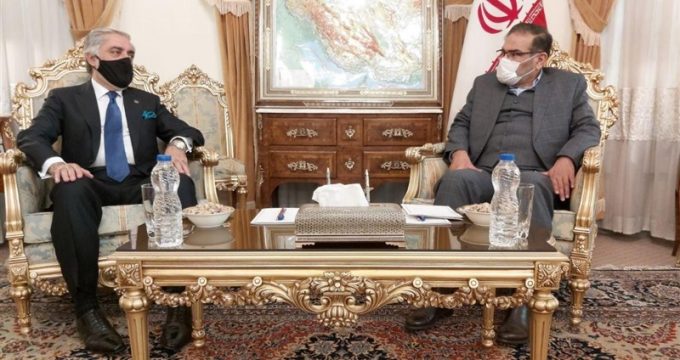 US policy based on insecurity, no matter where: Iran’s Shamkhani

The US government pursues the policy of fomenting insecurity and chaos, be it in Afghanistan or Iraq, Secretary of Iran’s Supreme National Security Council Ali Shamkhani said.

“The US’ policy is based upon creation of chaos and insecurity, no matter where it is pursued, in Afghanistan or in Iraq,” Shamkhani said in a meeting with Head of Afghanistan’s High Council for National Reconciliation Abdullah Abdullah in Tehran on Monday.

Washington’s destructive policies in the West Asia region have brought about nothing but wars, devastation and underdevelopment, the Iranian official deplored.

Denouncing the US’ role in the formation of terrorist groups, including Daesh, Shamkhani said the only way to avoid the dangerous American traps is resistance, unity and solidarity.

In order to establish stability and sustainable security in Afghanistan, it is necessary to hold intra-Afghan talks, protect the Republic system, safeguard the rights of Afghan ethnic and religious groups, and abide by the Constitution, he further said.

“The US has always sought to undermine the main components of stability in Afghanistan in order to continue its presence and drag out insecurity,” Shamkhani concluded.

Abdullah, for his part, expressed gratitude to Iran for supporting Afghanistan, saying promotion of ties with Tehran is a main priority in Kabul’s foreign policy agenda.

Briefing Shamkhani on the latest developments in the process of Afghan peace, Abdullah said Iran has always played a determining role in the establishment of regional stability and calm.

Abdullah, the former chief executive officer of the Afghan unity government, is in Iran for talks on the Afghan peace process, the intra-Afghan dialogue in Qatar, and the need for regional consensus and support for the Afghanistan peace efforts.