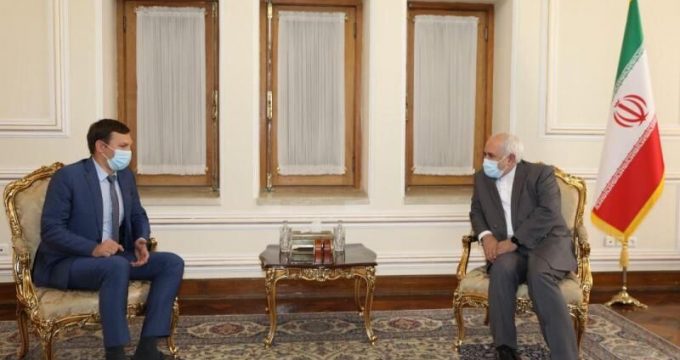 Talks on Ukrainian plane crash to bear result only through cooperation: FM Zarif

Iranian Foreign Minister Mohammad Javad Zarif in a meeting with Ukrainian Deputy Foreign Minister Yevgeny Yenin described as positive and constructive the talks between the two countries on the Ukrainian passenger plane incident, and expressed hope that the talks rapidly gets to the favorable and desired results.

During the meeting in Tehran on Monday evening, the two sides held talks on the Ukrainian plane incident.

Foreign Minister Zarif and Yenin also exchanged views on the expansion of bilateral ties and the ways to expand cooperation between the two countries in different areas.

Iranian and Ukrainian officials started the second round of talks on the passenger plane crash on October 19 expected to continue until October 21.

In the second round of negotiations, Iran’s Deputy Foreign Minister for Legal and International Affairs Mohsen Baharvand hosts his Ukrainian counterpart and his accompanying delegation.

Baharvand had earlier said that the National Information Agency of Ukraine will hold three technical meetings with Iran in this round of talks. One of the meetings is about technical discussions that the Aviation Authority will conduct. One session is about judicial matters that colleagues of the judiciary do, and one session on legal issues is about the amount of compensation for individuals and aircraft.

He stated that “after the three specialized groups held meetings and made progress on specified issues, we would have a public meeting.

“I and my Ukrainian counterpart, as well as all the specialized groups that negotiated the specific issues, will be present at the public meeting and consider the progress,” Baharvand added.

“If any guidance is needed, we will do some guidance and define the next steps that will be the next round of negotiations. We are trying to conclude negotiations as quickly as possible and in the shortest time,” he noted.

The first round of talks was held on July 30-31, 2020, under the supervision of deputy Foreign Minister for Legal and International Affairs Mohsen Baharvand, in Kiev, Ukraine.