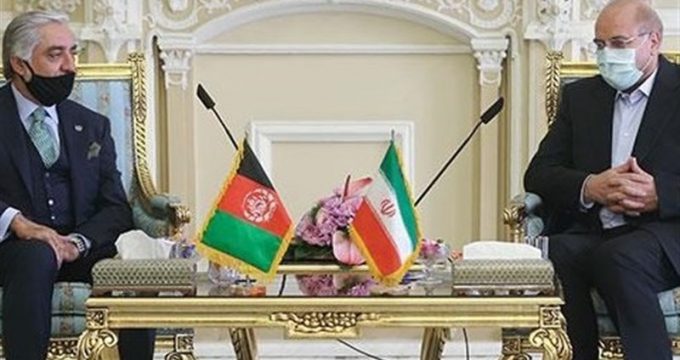 Speaker of the Iranian Parliament Mohammad Baqer Qalibaf voiced Tehran’s support for the efforts to maintain Afghanistan’s constitution and government.

In a meeting with Head of Afghanistan’s High Council for National Reconciliation Abdullah Abdullah in Tehran on Sunday, Qalibaf reaffirmed Iran’s support for the protection of the Afghan government, constitution, and the grand assembly, known as loya Jirga.

“Americans only seek to promote their own plans and do not care about progress and security of Islamic countries,” the Iranian speaker said.

He added that Afghanistan has been suffering from insecurity and instability from the former Soviet Union’s invasion of the country in 1979 up to the current presence of US forces.

“As long as regional countries and people of these countries and their different ethnic groups have not achieved unity, coordination and empathy, foreign forces, topped by the US, will only pursue their own ominous goals,” Qalibaf said.

Iran’s parliament speaker said the Islamic Republic has always tried to reinforce unity among Muslim countries without any interference in their internal affairs, noting that many issues related to Iran and Afghanistan are intertwined and the two countries enjoy deep historical and cultural bonds, Press TV reported.

Abdullah, for his part, commended Iran’s support for his country, saying that Tehran aims to support the establishment of peace in Afghanistan within the framework of the country’s constitution and under the aegis of its Islamic government.

He added that Iran and Afghanistan are working on a comprehensive document for boosting bilateral cooperation and have managed to make major advances in this regard.

Iran and Afghanistan have common historical and civilizational roots and their common customs will further cement bilateral cooperation, he further said.