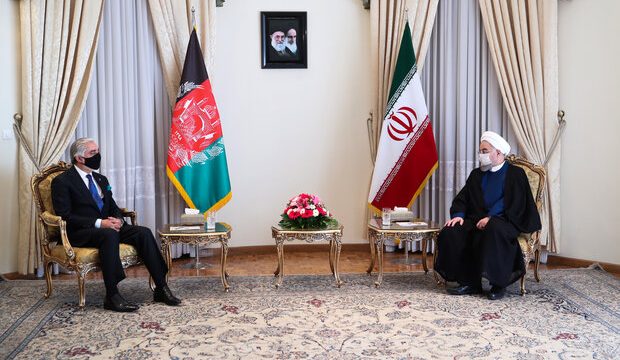 Rouhani made the remarks on Monday in a meeting with Abdullah Abdullah, the head of Afghanistan’s High Council for National Reconciliation (HCNR), who is in Tehran to hold talks with senior Iranian officials during an official three-day visit.

He stressed that the US intervention and presence as an aggressor country in Afghanistan was not in line with the will and the public opinion of this country, adding that the US government, which has failed several times in its policies in the region and the world, seeks its own political and electoral goals in the country.

The Iranian president added that the Islamic Republic supports the Intra-Afghan peace talks as the key to solve the country’s political problems.

Expressing hope for the success of the efforts to establish peace and stability in Afghanistan, the Iranian president added, “It is important that the people of Afghanistan achieve a real peace after years of war and conflict.”

He added, “Sustainable peace, stability and security in Afghanistan as a neighbor and brother country is of special importance for the Islamic Republic of Iran.”

Referring to the good relations between Iran and Afghanistan as two friendly and neighboring countries, Rouhani stressed the development and deepening of Tehran-Kabul relations.

He pointed to the Khaf-Herat railway, saying that project will come on stream in the coming days.

“Iran is ready to connect gas and oil pipelines to Afghanistan to provide our neighboring nation with energy products,” he added.

Rouhani stressed, “We have always stood along with the people of Afghanistan, and we will continue to support this country and all aspects.”

Abdullah Abdullah thanked Iran for hosting Afghan refugees during the years of war and conflict in this country and said, “During my visit to Tehran, I had good meetings with the officials of the Islamic Republic and I will take the message of Iranian support to Kabul and follow up the agreements between the two countries.”

He expressed hope that with the support of the Islamic Republic, he will witness the conclusion of the Afghan peace talks and the establishment of lasting security and peace in his country.