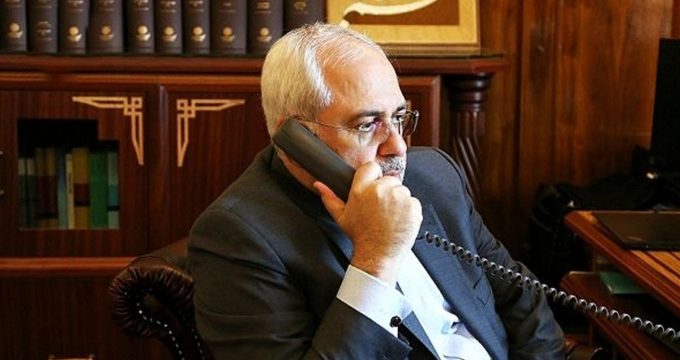 Iranian Foreign Minister Mohammad Javad Zarif in a telephone conversation with his Azeri counterpart Jeyhun Bayramov on Thursday voiced his country’s readiness to help achieve sustainable peace and solution to the Nagorno-Karabakh region dispute within the framework of a regional initiative by Iran, Turkey and Russia, and the Minsk Group.

During the phone talk today, the Azeri foreign minister elaborated on the latest battlefield developments in the Nagorno-Karabakh region.

Zarif, for his part, reaffirmed the Islamic Republic of Iran’s principled stances and emphasized Azerbaijan’s territorial integrity while voicing Iran’s readiness to help achieve sustainable peace and solution to the dispute within the framework of the regional initiative by Iran, Turkey, and Russia, as well as Minsk Group.

The Iranian and Azeri foreign ministers also emphasized the importance and role of the regional initiative in resolving the several-decade-old crisis.

Iran has repeatedly asked for a settlement of the conflict and urged the cessation of hostilities in Nagorno-Karabakh.

The dispute over Nagorno-Karabakh started in 1988 and led to military conflict in 1992.

Two days ago, Armenian and Azeri foreign ministers through Russia’s mediation agreed on a ceasefire but the violation of the ceasefire suggests the truce agreement is fragile.

Armenia and Azerbaijan resumed clashes on the border between the two countries last Sunday (September 27) blaming each other for the violence.

Nagorno-Karabakh has been a bone of contention between the two countries over the past decades.

In 1994, following four years of military conflict between the two countries, some European and regional governments stepped in to end the territorial dispute between Baku and Yerevan, and a ceasefire was finally established through the mediation of the Minsk Group of the Organization for Security and Co-operation in Europe (OSCE). But international efforts to resolve the conflict peacefully have so far been unsuccessful.