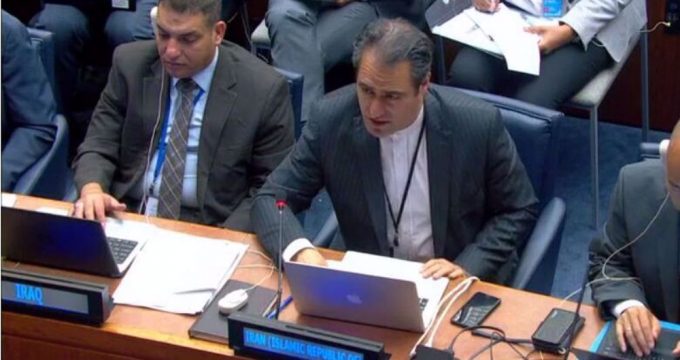 Iran has called on the international community to press Saudi Arabia to immediately implement the Comprehensive Safeguards Agreements of the International Atomic Energy Agency (IAEA) in full.

Heidar Ali Balouji, Iran’s permanent envoy to the United Nations General Assembly First Committee (also known as the Disarmament and International Security Committee), said Riyadh’s failure to implement the IAEA safeguards regime comes as the Arab country’s ambitious program allows it to hide some of its nuclear activities and not be inspected by the IAEA.

“Concerns about Saudi Arabia’s leaked nuclear activities and identification of its nuclear sites hidden in desert require international collective efforts, so much so that Saudi Arabia be held accountable for the consequences of its behaviors,” he added.

Balouji said a “steady” rather than “selective” implementation of the Safeguards will serve the international community in the long run.”

“The international community must ask Riyadh to immediately implement the Comprehensive Safeguards Agreements in full.”

He said a cessation of international nuclear assistance for Saudis would be the only way to allay these concerns.

“This lack of transparency in Saudi Arabia’s activities definitely violates the entire Safeguards regime,” he added.

Saudi Arabia’s clandestine nuclear program, which had been revealed by whistle-blowers, was recently confirmed by satellite images showing a large compound, in a suspicious location in the middle of the desert, a checkpoint, towering security fences, a big building about 150 feet on a side and pools for the collection of uranium waste; a typical blueprint for yellow-cake mills.

The Wall Street Journal uncovered the facility constructed in a remote area in Saudi Arabia for extracting uranium yellow-cake from uranium ore. Ironically, the facility is located near a solar-panel production area.

Observers say such undeclared nuclear capabilities in the hands of the KSA are extremely worrying, in light of the abysmal Saudi human rights record, and that the last thing anyone would wish for is a nuclear armed KSA.

Western officials are now anxious about an unusual facility located near al-Ula, a small city in the Saudi northwest desert near a solar-panel production area.

Last month, the Guardian revealed that Saudi Arabia may be in possession of enough mineable uranium ore to produce nuclear fuel.

According to confidential documents prepared by Chinese geologists for the kingdom and seen by the Guardian, Riyadh now possesses so much uranium ore reserves that it can start domestic production of nuclear fuel.

he Chinese geologists have been reportedly rushing to help Riyadh map its uranium reserves at breakneck speed as part of their nuclear energy cooperation agreement.

The geologists identified reserves that would be able to produce more than 90,000 tons of uranium from three “major deposits” in the center and northwest of the country, the report said.

The documents have been prepared by the Beijing Research Institute of Uranium Geology (BRIUG) and China National Nuclear Corporation (CNNC), working with the Saudi Geological Survey.

The disclosure will intensify concerns about Saudi Arabia’s interest in an atomic weapons program.

Experts warn that if Saudi Arabia is able to mine sufficient uranium domestically, rather than relying on foreign providers, it could give the kingdom a boost toward creating its own weapons program.