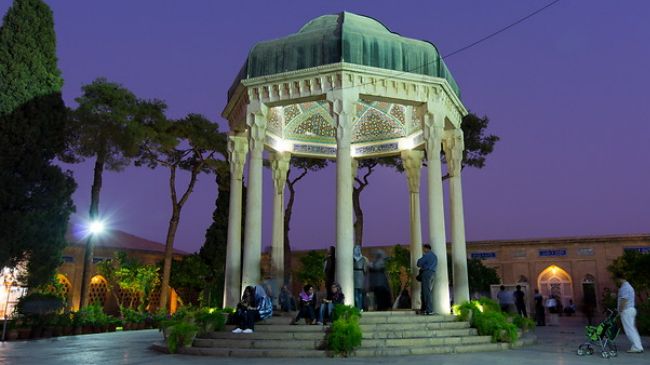 Hafez Day was celebrated online from his tomb far on Saturday evening observing the restrictions on conventions due to corona pandemic.

Several officials made speeches in the ceremony with a focus on love and peace, the theme of Hafez poetry.

Shamsuddin Mohammad Shirazi, who is better known by his pen name “Hafez” was a Persian poet who lauded the joys of love but also criticized hypocrisy. He was born in 1315 AD and passed away in 1390 AD in Shiraz.

He was a huge influence on German Johann Wolfgang von Goethe (1749–1832). Goethe came across a translation of Hafez when he was about 65 years old, which changed his life. Goethe could establish an image of the mystic terms and language of Hafez. His understating of Hafez made him compose Western poetry with Eastern content in West-Eastern Divan.

The representative of the Supreme Leader in Fars Province and Imam of Friday prayers of Shiraz said in the commemoration ceremony that today, the world looks at Hafez as an artist whose deep insight put forth a dynamic interpretation of the world.

Saying that Hafez’ understating of the world is rooted in the Holy Quran, Ayatollah Lotfollah Dejkam added that the world needs Hafez.

Reciting a poem from Hafez, he said love is the reason of creation and all the world is a mirror to reflect God.

The spread of COVID-19 virus made the ceremony be held online. The ceremony to commemorate Hafez is held every year on Mehr 19 (October 11).