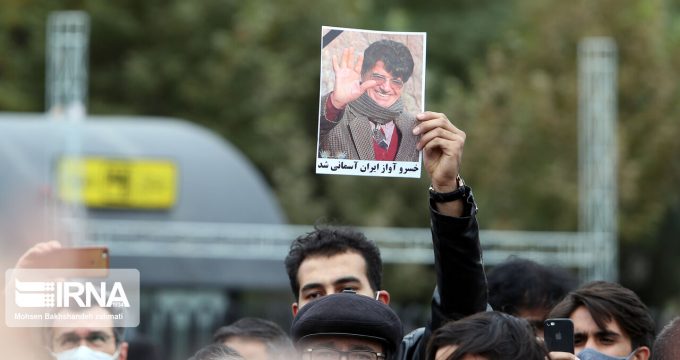 Mastero Mohammadreza Shajarian, Iran’s Classic Music legend, and world-acclaimed vocalist was laid to rest in the city of Tous near his hometown, Mashad, on Saturday morning.

Shajarian, who suffered from cancer for years, passed away at a hospital in Tehran on Thursday.

His funeral procession was held in a restricted manner due to health protocols imposed by COVID19 pandemic to prevent the spread of the deadly virus.

Big screens were installed across Mashad streets to allow his fans to watch the funeral procession live.

Shajarian’s family had asked for his body to be buried near the tomb of Ferdowsi, the Great Iranian poet.

Ferdowsi is well-known for preserving Persian Language and Shajarian served the same purpose for Iranian classic music. Laying to rest the maestro near Ferdowsi draws similarity in services of the two Iranian figures after 1,000 year time period.

UN representative office in Iran said in a message that the demise of the great Iranian vocalist Mohammad Reza Shajarian caused deep grief and sorrow.

“We on behalf of the UN family in Iran express condolences to Shajarian’s family and all his lovers in Iran and world. May the departed soul rest in peace,” the message said.

Iran’s Embassy in Zagreb in a tweet also extended condolences to the honorable and culture-loving compatriots, as well as lovers of Iranian culture and art, the death of the great Iranian vocalist and the internationally acclaimed figure.

Meanwhile, the Swiss Embassy to Iran expressed sincere condolences on the demise of Maestro Mohammad Reza Shajarian. “Switzerland will cherish the memories of his concerts in Lausanne and Zurich.”

The British Embassy in Tehran also extended condolences to all his fans on the departure of one of the most prominent figures in Iranian traditional music of the last century.

Iran’s Ambassador to the Azerbaijan Republic also paid homage to the late vocalist on his Twitter, expressing deep regret over the loss of “a towering figure in international music”.

“Maestro Shajarian was a great & true Ambassador of Iran, her children and—most of all—her culture,” Zarif wrote in his Twitter account on Thursday.

“I extend my deepest condolences to Iranians across the world and particularly to his loved ones,” he added.

“From God we come and to Him we return.”