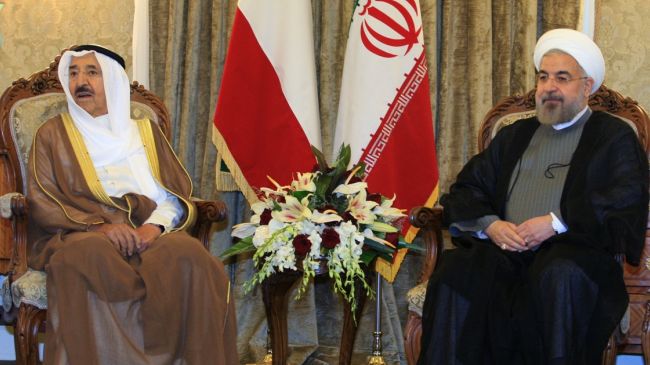 In a Wednesday message to Sheikh Nawaf al-Ahmad Al-Sabah, the new emir of Kuwait, President Hassan Rouhani stated that “I hereby condole you, the Kuwaiti government and nation on the demise of the late emir, who played a significant role in establishing regional balance and moderation.”

He also prayed to God Almighty to bestow peace upon His Soul and patience for the Royal Family.

Meanwhile, Iranian Foreign Minister Mohammad Javad Zarif in a message wished God’s blessings for Emir of Kuwait, saying the late Emir painted an image of moderation and power balance for Kuwait and the region.

In a post on his Twitter account on Tuesday, Foreign Minister Zarif said he is saddened by the passing away of Sheikh Sabah Al-Ahmad Al-Jaber Al-Sabah, the late Emir of Kuwait, who painted an image of moderation and equilibrium for Kuwait and the region.

The top diplomat then wished the Kuwaiti people and government prosperity, security, stability and progress under a new Emir.

Moreover, Iranian Parliament speaker Mohammad Bagher Ghalibaf in a message to the speaker of the Kuwaiti National Assembly Marzouq al-Ghanim, expressed his condolences over the Late Emir’s death and emphasized his role in resolving regional issues through political settlements.

Kuwait Sheikh Sabah Al-Ahmad Al-Sabah passed away at the age of 91 in the United States.

Born in 1929, Sheikh Sabah is widely considered as the architect of modern Kuwait’s foreign policy.