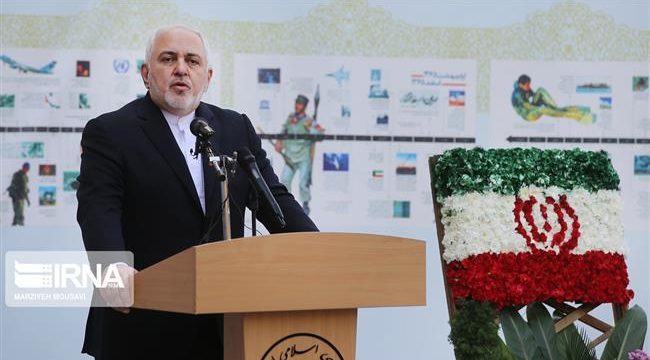 “You claim you eliminated Daesh. You killed Daesh’s number one enemy in a wretched act and with utmost bestiality,” Zarif said, addressing the families of the Foreign Ministry’s employees killed during Iraq’s foreign-backed 1980-80 war on Iran, in Tehran on Monday.

General Soleimani, the former commander of the Quds Force of Iran’s Islamic Revolution Guards Corps (IRGC), and his companions were assassinated in a US airstrike in Baghdad on January 3. The attack came while the Iranian commander, who had earned reputation as the region’s most prominent and decisive anti-terror figure, was on an official visit to the Iraqi capital.

Washington and its allies boast about uprooting the terrorists in Iraq and Syria, while their long presence in the Arab countries featured suspicious and very slow progress, if any, against the group.

On the ground, however, it was the Islamic Republic that rushed to the countries’ assistance right after Daesh’s emergence in 2014, helping them defeat it in late 2017 by providing them with crucial military advisory support under General Soleimani’s auspices.

“You are cowardly and vicious,” Zarif said, referring to the United States. “You failed to bring this nation to its knees,” he added.

Iran responded to the US terrorist act by firing volleys of ballistic missiles at the Ain al-Assad Airbase and another American outpost in Iraq. The assassination was also followed by thousands-strong funeral processions and protest rallies in both Iran and Iraq.

Zarif asserted that the Iranian nation relies on a “profound culture of self-denial and martyrdom.” It is this culture that has helped the people resist foreign pressure and aggression ever since the Islamic Revolution in 1979, including during the Iraqi war which Western and regional countries supported against Iran, the top diplomat remarked.

“Everyone has been taking action against Iran, and they still do so, but it is the culture of sacrifice and martyrdom that has sustained this people,” the foreign minister said.