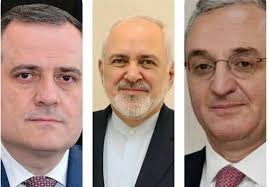 Iranian Foreign Minister Mohammad Javad Zarif called on Armenia and the Republic of Azerbaijan to exercise restraint, agree on a ceasefire and launch negotiations after a fresh round of military clashes between the two neighbors.

Zarif held separate telephone conversations with his Azeri and Armenian counterparts on Sunday night following the outbreak of military clashes between the two countries.

In the talks with Minister of Foreign Affairs of the Republic of Azerbaijan Jeyhun Bayramov and with Armenian Foreign Minister Zohrab Mnatsakanyan, the top Iranian diplomat was informed about the latest conditions and on-the-field situation in the disputed region.

Zarif expressed concern about the flare-up of tensions, and called on the warring sides to show self-restraint, agree on a ceasefire and immediate cessation of hostilities, and begin negotiations within the framework of the international law and regulations.

He also notified the two neighboring states that the Islamic Republic of Iran is ready to employ all of its capacities for the establishment of ceasefire, start of dialogue, and restoration of peace and calm.

The military forces of Armenia and the Republic of Azerbaijan have started a new round of clashes over the disputed region of Nagorno-Karabakh, as international calls for calm after the heaviest fighting between the two countries in years grew.

The clashes between the two former Soviet republics, which fought a war in the 1990s, were the latest flare-up of a long-running conflict over Nagorno-Karabakh, a breakaway region that is inside Azerbaijan but is run by ethnic Armenians.