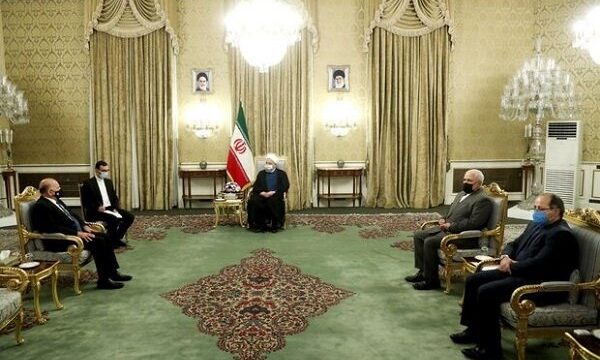 Iranian President Hassan Rouhani said that Tehran considers the presence of US terrorist forces in the region as detrimental to the security and stability of the region.

Speaking in a meeting with visiting Iraqi Foreign Minister Fuad Hussein in Tehran on Sat., Rouhani said that Iran considers Iraq as a friend country.

Today, “We consider the unity of Shias and interaction between different groups including Shias, Sunnis, and Kurds in this country as an important principle. Iran stands by the government and people of Iraq and also is ready to help unity and cohesion of this country.”

“We have always reflected our views clear and unequivocal in our political positions,” he said and added that the Islamic Republic of Iran considers the presence of US Armed Forces in the region, whether in Iraq or Afghanistan as well as other southern Persian Gulf countries, detrimental to the regional peace and stability.

Elsewhere in his remarks, President Rouhani pointed to the internal issues in Iraq and added, “We have never sought to interfere in Iraq’s internal affairs and relations between Iraqi groups. We have always believed that Iraqi groups have good relations for the preservation and development of their country.”

While emphasizing on developing and deepening bilateral ties between Iran and Iraq in various political, cultural, and economic areas, in particular, Rouhani stressed the need to accelerate the implementation of agreements inked between the two countries in the previous visit of Iranian and Iraqi officials.

The visiting Iraqi foreign minister, for his part, thanked and praised Iran’s contributions and assistance to the government and people of Iraq in different periods.

Working to further develop and deepen relations between the two countries, preparing the preliminary ground for the implementation of the two countries’ agreements (including on border cooperation, transportation) as well as preparing Arvand River for the development of trade and trade cooperation as the main objective of the trip to the Islamic Republic of Iran, Iraqi foreign minister stated.

With the special emphasis of the Iraqi Prime Minister, members of a Specialized Committee will visit Iran in the coming weeks to negotiate and prepare the ground for the implementation of the agreements inked between the two countries, Fuad Hussein emphasized.