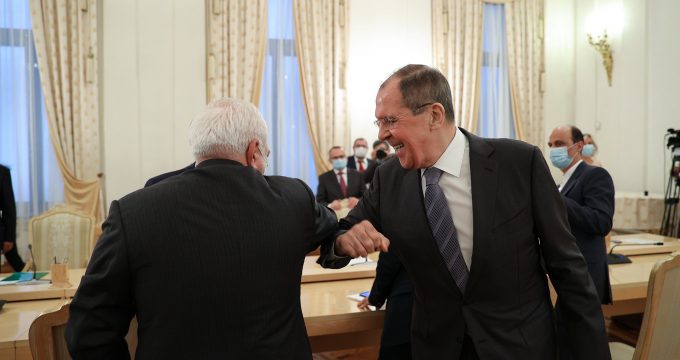 ranian Foreign Minister Mohammad Javad Zarif is in Moscow for an official visit to discuss regional issues and matters of mutual interest, including Iran’s 2015 nuclear deal, with his Russian counterpart Sergei Lavrov.

Upon arrival at Vnukovo International Airport in Moscow late on Wednesday, Zarif said that the Iran nuclear deal, officially known as the Joint Comprehensive Plan of Action (JCPOA), would top the agenda of talks between the two diplomats.

Zarif hailed the key roles that Russia and China have played against futile US plots to kill the JCPOA during the past few months.

The visit comes days after the United States announced that it had re-imposed what it calls “UN” sanctions on Tehran through the JCPOA’s so-called snapback mechanism.

However, Russia and other UN Security Council members have repeatedly said Washington does not have the authority to use that mechanism as it is no longer a participant state to the Iran deal following its withdrawal from the multilateral nuclear agreement in May 2018.

Referring to close coordination between Tehran and Moscow in various fields, the top Iranian diplomat said “this allows contacts with Russian colleagues, and my current trip to Moscow is the third to the Russian capital during the coronavirus outbreak.”

“We have serious problems in the region. The Syrian issue needs special coordination, and we will coordinate our measures with Russia and Turkey in the Astana talks,” he said.

Zarif described as excellent the bilateral ties between Tehran and Moscow, saying ways to further develop mutual cooperation would be discussed in the meeting.

The minister said that during his Thursday meeting with Lavrov, the two officials would also discuss the peace process in Afghanistan.

“The issue of Afghanistan needs to be further examined in view of the peace talks between the Taliban [militant group] and the Afghan government and the difficult position of the Taliban,” he said.

The Iranian foreign minister also dismissed reports by some Lebanese media outlets that the French government had asked him to meet with Russian officials about the situation in Lebanon.

“This is not true. We may talk to Russia about Lebanon, but this is not a priority,” he said.