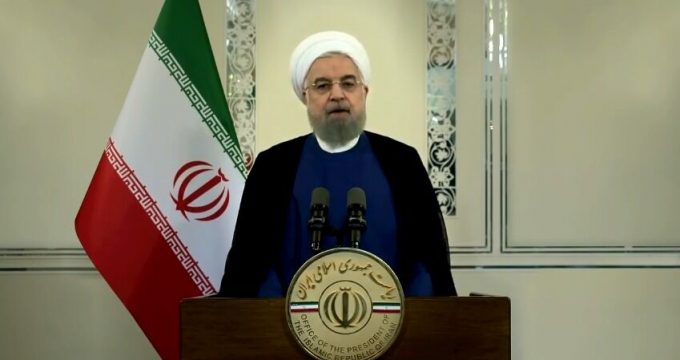 Hassan Rouhani: Here, I should express our appreciation to the presidents of the Security Council for the months of August and September 2020, as well as to thirteen of its members—especially Russia and China—who twice said a decisive and resounding “NO” to the unlawful US attempt to exploit the Council and its Resolution 2231.

This is a victory not just for Iran, but for the global community—during the transitional international order in the post-Western world—that an aspirant of hegemony is humiliated in such self-created isolation.

Where can you find precedent for a government to renege, without any reason, on the outcome of 13 years of multilateral talks—also attended by its predecessor, shamelessly violate a resolution of the Security Council and even punish others for abiding by a UNSC resolution? And simultaneously claim to be seeking negotiations and a “big deal”?

The United States can impose neither negotiations, nor war on us.

Life is hard under sanctions. However, harder, is life without independence.

Political freedom at home is important. We—as the oldest democracy in the Middle East—are proud of our people determining their destiny and will not trade domestic freedom with foreign interference.

Democracy is the sovereign right of a nation, and not the right of interference by an outsider—let alone a terrorist and interventionist outsider that remains captive to the illusions of 19 August 1953, when its predecessors overthrew the only democracy in the Middle East through a coup d’état.

Dignity and prosperity of our nation are essential for us; and they are attained through diplomacy relying on national will coupled with resilience.

We are not a bargaining chip in U.S. elections and domestic policy.

Any U.S. administration after the upcoming elections will have no choice but to surrender to the resilience of the Iranian nation.

And for the world: Today is the time to say “no” to bullying and arrogance. The era of dominance and hegemony is long over. Our nations and children deserve a better and safer world based on the rule of law.

Now is the time for the right choice.